The PowerColor Radeon RX 580 Red Devil is a factory overclocked video card that was designed from the beginning to be overclocked.  It does come with a silent mode BIOS switch but as hardware enthusiasts that just seems wrong.

During the overclocking adventure I was able to pull a very respectable 1420Mhz Core and 2200Mhz Memory overclock proving that this chip on this card does have some headroom for overclocking.

The interesting thing to note is that the RX 580 Red Devil Golden Sample clocks in at 1425Mhz and likely has some additional headroom so it might be worth checking out that version if you want to play the numbers game.

As with all of our reviews the overclocking tests show the default score against the overclocked one giving you an idea as to what kind of gains you can expect. 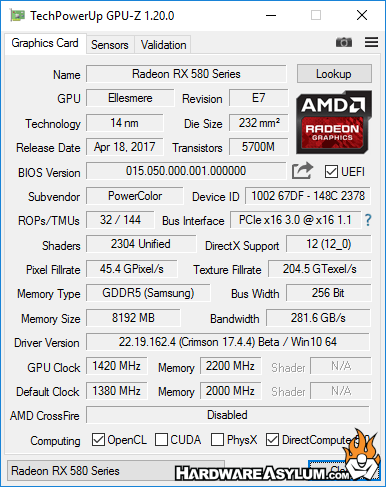 Overclocking is something most enthusiasts like to do and while I was able to get an extra 40Mhz out of the RX 580 there was only a minor increases in game performance based on the Hitman 2016 scores.  I suspect some of the disappointment comes from the lack of clockspeed which makes me wonder if the Golden Sample is really that much faster, and if so what else did they change?