The Kublai KL06 supports a small assortment of motherboards including Micro-ATX, and Mini-ITX and DTX.  This will effectively exclude a majority of overclocking designs but will allow a large number of X99 and gaming motherboards.

In terms of CPU cooling there is plenty of room for 120mm and 240mm AIO watercoolers however given the size of the case a custom water loop would be rather difficult.  Of course the standing assumption with “positive pressure” cases is that you will be aircooling everything and take full advantage of the increased airflow.  You can still attain this using a radiator however the effect is often diminished.

To help illustrate what you could do with a Kublai KL06 I offer the following build.

For this build I’ll be removing the included fans as they are only 3-pin fans and cannot be controlled with the motherboard.  The replacements are PWM versions that come with the Tundra TD02.  The fans are mounted directly to the case using two plastic rails and connected using large fan screws. 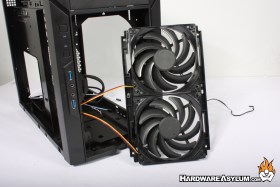 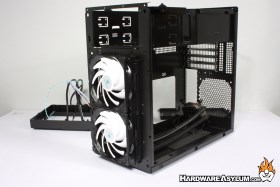 The TD02 radiator is then directly mounted to the inside of the case using short screws with the hoses towards the bottom of the case.  Overall the fit is extremely tight and does obscure part of the lower 5.25” drive bay.  Due to the hose placement the internal hard drive rack had to be removed but given that the placement is now adjustable you could run the hoses though the 3.5” drive portion and still retain the six SSDs.  I removed everything since this build only required a single SSD and single Bluray player. 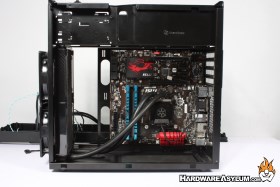 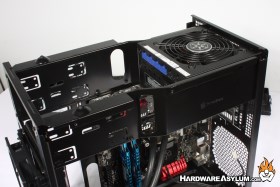 Silverstone makes one of the most compact 850w 80Plus Gold power supplies on the market and it happens to fit perfectly into the KL06.   The modular design will help with cable management and while the flat cables may seem cumbersome they do lay down with a little persuasion.