One of the biggest names in watercooling is Danger Den and not because they offer a ton of different products but rather their years of service to the watercooling enthusiast and providing them what they need at just the right time.  The first block we ever owned was the Danger Den Maze 4 designed for the Pentium 4.  The base was extra large and pre-drilled to support thermoelectric cooling and while we never opted to run TEC it worked quite well.  The block now resides as an integral part to our Single Stage waterchiller by acting as the thermal transfer from phase to water.

In this review we will be looking at the latest CPU water block from Danger Den called the M6.  This block is designed specifically for the LGA2011 Sandy Bridge E platform but comes drilled for LGA1366 and LGA1155/6.

Triple barb block designs were popular 8+ years ago because they were relatively inexpensive to produce and offered a higher degree of cooling.  Designers later figured out how to offer similar performance by channeling water internal to the waterblock and only needing two barbs to make it happen.. 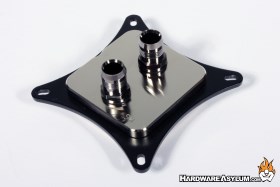 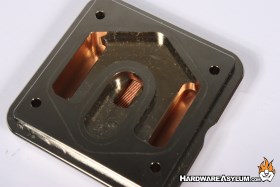 As the photo shows the middle section of the DD-M6 replicates the performance found in triple barb designs but does so with full sized water channels.

The Danger Den DD-M6 is comprised of four major components.  Both the top and middle are nickel plated with the mating and appearance surfaces polished to a mirror finish.  Taking the block apart also gives you access to the mounting plate so you can install it on systems other than the LGA2011. 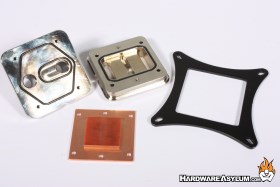 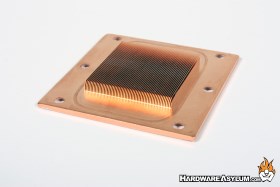 Watercooling performance is based on two important factors, Surface Area and Pressure/Volume.  These two factors rarely scale the same degree at the same time but together determine overall efficiency.  For instance lower surface area and higher pressure may cool similar to a block with high surface area running at a lower pressure.  For this reason many watercooling enthusiasts will ask about pressure drop since that will indicate how large of pump they need to keep the system cool, if they underestimate then overall performance will suffer.

The Danger Den DD-M6 features a micro skiving process that offers a high degree of surface area with a median amount of pressure drop compaired to the competition.  You can consult the flow charts on the Danger Den website for more information.
Cooling