Small form factor systems are often plagued with two issues, performance and cooling.  Assuming the same size chassis if you want to increase performance you often increase the heat load and thus put more demand on the cooling, increased noise and generally have a bad time.  Likewise when you reduce the size of the case you often have to deal with performance concerns and finding a cooling method that matches.

In this review we will be looking at the Noctua NH-L9x65 L-Type Low Profile Cooler.  This is a cooler designed for all modern processors from LGA 2011 down to LGA 1150 and FM2+ but is only recommended for CPUs with a TDP of 85w or less.  As the name indicates this is a low profile cooler designed to be ultra compact for use in small form factor cases and HTPC Environments. 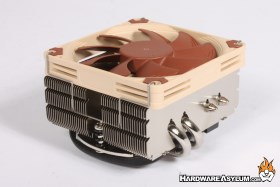 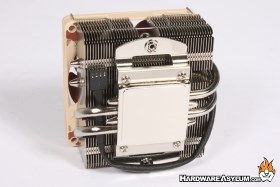 The Noctua NH-L9x65 measures in at 95mm x 95mm x 65mm (W x D x H) giving the heatsink a size similar to most OEM coolers from Intel and AMD.  This is a four heatpiple design with a rather unique heatpipe configuation that is not segmented in the middle but rather has U shaped bended pairs on each side of the cooler.  Some would say this gives the cooler less thermal capacity but allows it to react quickly to changes in load temperature.

Heatsink mounting is accomplished using the excellent universal mounting hardware from Noctua where a base is built up on the motherboard leaving two posts to attach the heatsink.  The distance between these posts can change between heatsink designs but does allow for quick heatsink swaps if you need to switch coolers for better performance or want to try a different design. 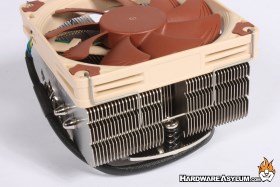 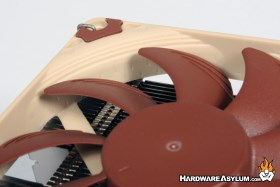 Noctua has included the NF-A9x14 PWM fan with this heatsink which comes with many performance enhancing features found on the larger NF-A14 and other NF fans.  The fan comes with a maximum speed of 2500 rpm with a noise ceiling of 23.6 dBA.  These numbers can be modified using the LNA (Low Noise Adaptor) however, we found the fan to be rather quiet even when spinning at full RPM.

Some of the notable fan features include a SS02 bearing which is a self stabilizing oil pressure bearing for lower resistance and longer life.  “Flow Acceleration Channels” for lowering vortex noise at the fan tips.  “Inner Surface Microstructures” (golf ball dimples) to create a boundary layer for the fan as it spins in the frame and a stepped inlet design for increased suction capacity especially in space restricted environments.

While these may not sound like much when you consider that the fan is designed to run near silent and at low RPM every little bit helps when trying to maximize thermal and noise performance.