When any new technology is launched there is a natural lag when it comes to adopting the new tech.  Sure, there are a select few who are first in line to make a purchase but a larger majority often decide to stand back and see how things play out.  For DDR5 and the Intel Alder Lake we can add manufacturing and shipment delays to the list which have not only frustrated the early adopters but also amplified the need for quality products at the right time.

In this review we will be looking at the ARES DDR5 Desktop memory from Lexar.  These modules are available in dual channel memory kits with a total capacity of 32GB.  If you happen to be part of the growing movement against RGB lighting you will be humbled to know that the ARES DDR5 modules are currently RGB adverse and feature a very conservative yet stylish heatspreader design. 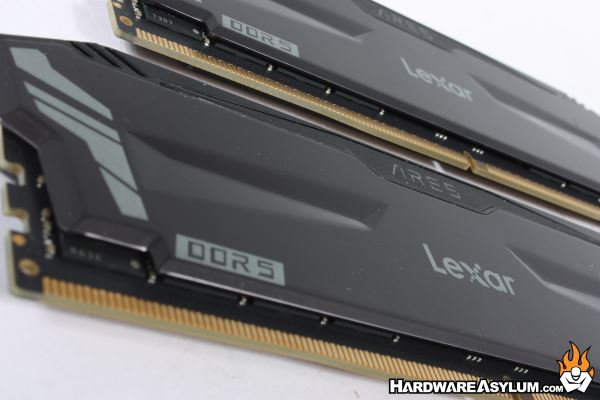 Currently, the Lexar ARES DDR5 OC Desktop Memory is available as a single SKU featuring everything great about DDR5 including On-die ECC components for improved stability, XMP 3.0 memory profiles and a built in Power Management IC for increased power efficiency and voltage control.

Unfortunately, the ARES is only available in a single speed of 5200Mhz and while that may have positioned these modules at the lower end of the performance spectrum, they are no slouch when it comes to overall performance.

While faster is often better we have to keep in mind that one of the early adoption costs is that we get more than we can use.  This is something you will notice with DDR5 at any speed on the Alder Lake processors.

As was mentioned before Alder Lake brings with it a new DDR memory standard designed to handle the memory demands of modern systems and the new processor architecture.  It offers the promise of higher memory speeds at the expense of higher latencies.  This is not uncommon given that while the technology changes they still conform to the same basic rules and it often takes some time before we see latencies drop and speeds increase.

For instance, when DDR3 and DDR4 launched many enthusiasts noted that the memory timings had more than double from the previous generation and often ran at the same speed, if not slower.  This translated into lower-than-expected memory performance which tended to improve with subsequent processor releases as memory utilization improved.

Fortunately, DDR5 and the Alder Lake platform has already proven it can be faster than the previous generation however, many applications are not optimized to take advantage of the memory bandwidth and even if it is a major performance bottleneck and it is difficult to know if memory speed is a contributing factor or is simply being masked off by an overtly massively powerful CPU.

Despite these “growing pains” DDR5 brings with it many benefits such as a higher default speed of 4800Mhz and lower operating voltages of 1.1v.  The DDR5 architecture also supports higher chip densities allowing manufacturers to create much larger memory modules with fewer chips.  This increases performance across the board and lowers manufacturing costs at the same time.

The modules featured in this review are not much faster than the base model and when you consider that the module is a hot clocked Crucial stick you'll quickly realize why the speed was limited to 5200Mhz.  For those of you who are not  aware be sure to check out the overclocking page on our Crucial DDR5 memory review.