The Ninjalane Multi-GPU index is a portable set of data we can use to determine the multi-gpu potential of any motherboard.  A higher index number indicates a favorable condition for multiple graphics cards while a lower number indicates a hindrance in one of our leading indicators.  Since the Index is not dependent on system architecture it can be applied to any motherboard regardless of processor or chipset generations.
Multi-GPU Scorecard
Index: 5.5
Optimized: 2x
Max Support: 5x
Technologies Supported
NVidia SLI
AMD Crossfire 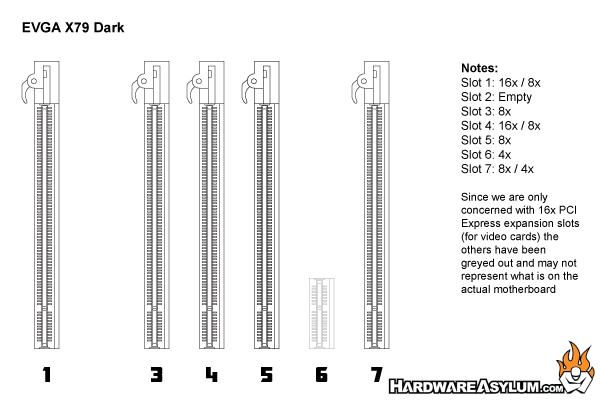 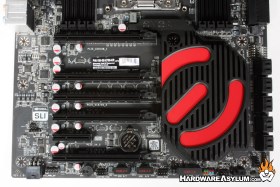 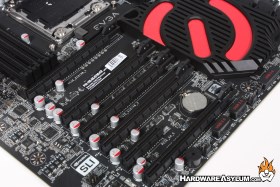 As indicated by the PCI Express layout chart there are a total of five 16x PCI Express slots on this motherboard with all five using bandwidth earmarked for video cards.  The configuration is rather unique because you are given a choice of bandwidth allocations depending on your system configuration.

The five 16x slots all use bandwidth directly from the CPU.  The seventh and final slot shares 8x lanes with the 4x slot at position 6.  This arraignment is rather unique since it is configured for 3-way SLI taking full advantage of the PCI Express lanes from the CPU.

Slot one is your primary video card slot and will run at a full 16x direct from the CPU when only a single card is installed.  Installing cards in slot three will split the bandwidth with 8x lanes going to each slot.    Slot 4 is your second 16x slot which shares lanes with its nearest downstairs neighbor.   This configuration clearly favors 2-way video card setups with an aggressive setup for 3-way that wastes 8x lanes assuming dual slot GPU coolers.

For best video performance you will want to populate slots one and four with video cards.  For proper quad card configurations you'll populate slots one, three, five and seven and expect 8x lanes for each slot. 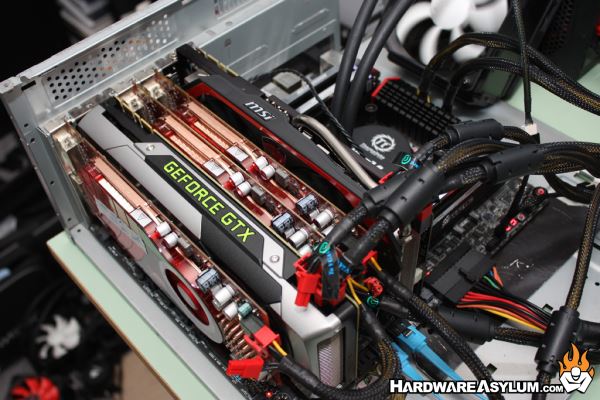 During our tested we successfully loaded windows with five video cards properly installed including two GTX 770's and three HD 4850's.  While we consider the X79 Dark to be optimized for dual card configurations you do have the ability to construct a five card super computer when using single slot coolers.  Expect 8x lanes to be available to each card.
Motherboards