Benchtop controls are located in the upper left of the motherboard near the 24 pin power connector and consist of power, reset and CMOS clear.  Nearby you'll find the dual purpose debug LED that reads off post codes during boot and later relays CPU temp.  Below the debug LED is a fairly new onboard feature called GPU Link.  There is very little documentation related to this plug but we suspect it is similar to the Asus hotwire for controlling GPUs

Voltage test points are no longer a series of pads on the PCB but are instead meter friendly test leads located in a pin block located behind the VRM heatsink.  Test leads are included and follow the standard format found on similar EVGA video cards. 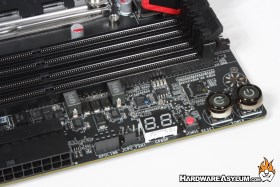 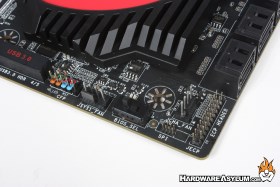 Triple BIOS has been a key EVGA feature for the past several years and we are glad to see on this motherboard.  The BIOS switch has been moved to the lower right of the motherboard and a red LED will indicate which BIOS chip is currently active.  A single BIOS chip is replaceable and located near the onboard PCI Express disable switches. 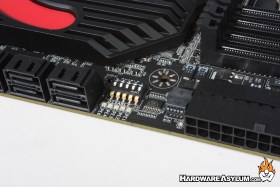 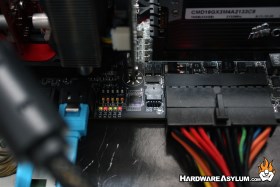 Above the SATA connections you will find a series of jumpers which allow you to disable any of the PCI Express slots for debugging.  It also gives you a convenient way to run multi card benchmarks without having to tear everything down.  A new feature is an indicator light next to the switch indicating what slot is populated and how fast the connection is.  It would appear that PCI Express 3.0 will show red while PCI Express 2.0 is green. 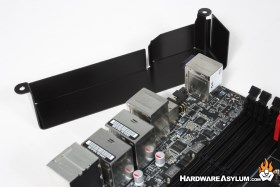 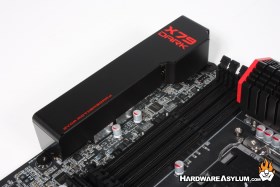 A cool new item we saw at CES is this X79 Dark I/O cover.  The anodized aluminum cover is an optional decorative item that attaches to the motherboard using the existing motherboard screws and mounting points.
Fan Headers
Normally we don't comment on the number of fan headers any motherboard has since their numbers vary between motherboard brands and often reflect the designer's personal feelings rather than an industry standard.  With the EVGA X79 Dark we're going to make an exception and simply say.  Fan headers?

Yes, we had to question how many fan headers where actually on this motherboard after trying to hook up our Thermaltake Water 2.0 for testing.  There are a total of six PWM enabled fan headers on this motherboard which is actually pretty average.  However, the location of them is a little disturbing.  You will find one to the left near the first PCI Express slot followed by a second to the right near the 24 pin power connector.  The remaining four are located at the bottom of the motherboard under the last PCI Express slot.  None of these are marked "CPU" leaving us to wonder where our dual fan self contained watercooling units should be connected, how long the fan tails need to be and we are to route them.

Then again, this is an enthusiast level motherboard meaning that DIY watercooling, SS Phase and LN2 are likely the target demographic, none of which need a CPU fan header.
Motherboards