As with all of our reviews, we pit the default speed system against the overclocked one in a head-to-head byte match.  The effective overclock for these tests is 4.9GHz @ 47x multiplier and 104 BLCK.  For this overclock we wanted to keep with our AIO cooling solution and see just how high the processor would clock on "air".

As with most modern AMD processors the A10 is rumored to have no cold bug so when we finally put this processor under LN2 we'll be benching with a "full-pot" which will put the processor at over -160c.  That is when the real overclocking begins.
CPU-Z 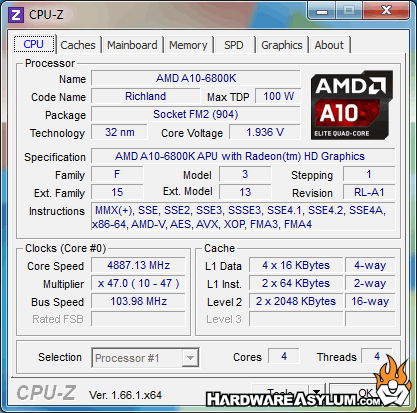 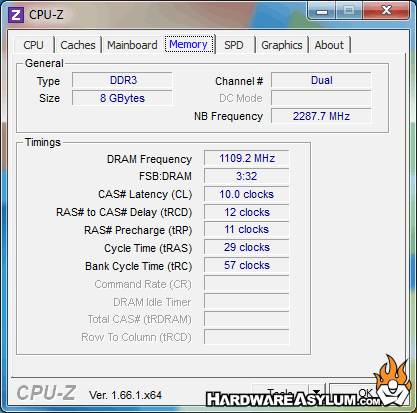 Overclocking Conclusion
Overclocking the Richland A10 6800K was a new experience for us given that the last AMD motherboard we tested was around the time Bulldozer was released back in late 2011.  Much to our surprised the overclocking process was exactly the same and with the help of the Black Edition processor we inched our way up the Mhz frequency ladder.  Given that our A10 was already running at 4.4Ghz (Turbo) we didn't expect much in an overclocking delta but are happy to report that we almost reached 5Ghz on air.

In terms of total performance there are two things to keep in mind.  1) This processor already will turbo up to 4.4Ghz under the right thermal conditions so any overclock you plan needs to be above that frequency.  2) When you change any setting the G1 Sniper will disable turbo so raising the multiplier up to 43x will actually decrease overall performance given that your clock setting is below the turbo threshold.

Overall we aren't all that happy with the overclocked performance of the A10.  In the big picture we were only able to gain 500Mhz which moved our Sandra numbers up maybe 20 points across the board.  The real benefit was in memory performance which is a combination of tweaks including XMP and a slight bump in baseclock.
Motherboards