For the past several years Intel has been at the forefront of PC performance when they launched the 2600K Sandy Bridge CPU.  During this time AMD, their largest competitor, had refocused their efforts on building power efficient APU style processors which worked extremely well in small form factor machines.  These didn't have the same power when it came to gaming and high-end computing as their FX line of CPUs was supposed to fill that gap.  While they did have eight cores and overclocked quite well they ran extremely hot and still couldn’t match the performance of the Intel LGA 115x.

Strangely enough while AMD had been absent from the performance PC space Intel didn’t do much to increase performance either opting instead to include new and emerging features that much of the enthusiast sector largely ignored.  Their latest iteration, Skylake and Kaby Lake, feature DDR4 memory, come with HyperThreading and 20 lanes of PCI Express making them virtually identical to the old Sandy Bridge with negligible performance gains largely due to an absence of competition.

Earlier this year AMD released their answer to the performance PC problem called Ryzen.  Ryzen is a ground up processor design based on the Zen scalable architecture and promises to give AMD a strong future in the PC space by providing lower cost CPUs that can deliver big numbers when needed.

In this review I’ll be looking at the Aorus AX370 Gaming 5 motherboard for the new AMD Ryzen series of CPUs.  The Aorus brand has been with Gigabyte for several years mostly attached to premium Gigabyte gaming notebooks and PC accessories.  During CES 2017 Gigabyte formally announced that Aorus would become a companywide brand for all high-end gaming products including motherboards, video cards and gaming accessories. 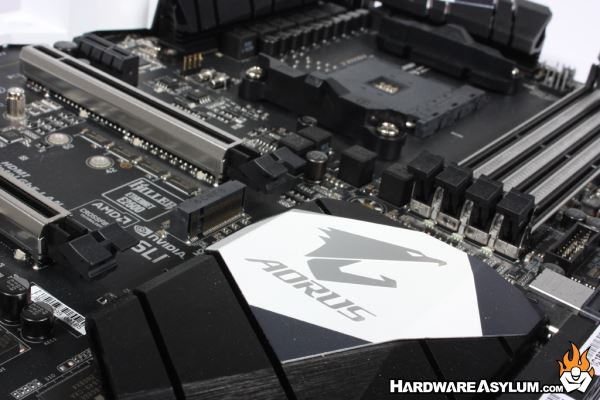 The standards for what makes up a gaming motherboard have changed over the years due mostly to technological advances and consumer trends.  While I often tell people to strike a balance between “what you can afford” and “what you need to have” the fact of the matter is you shouldn’t skimp on a motherboard.  It is the one item that will last between upgrades (to a certain degree) and will determine what expansion cards you’ll ultimately need and/or want to run.

Current trends indicate that high-end onboard audio combined with a customizable network controller is what most gamers have accepted for their gaming rigs.  This has become an appealing combo because it frees up expansion slots for more important things like Wi-Fi and video cards.  The Aorus AX370 Gaming 5 is configured like any other 5 series motherboard from Gigabyte with an entire array of Ultra Durable features, a number of cutting edge storage options, some overclocking controls and a dazzling light show.