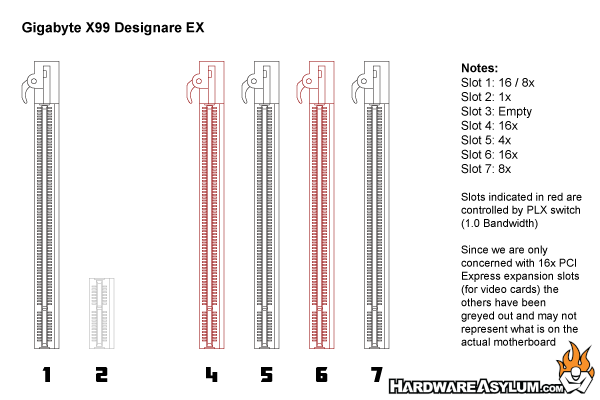 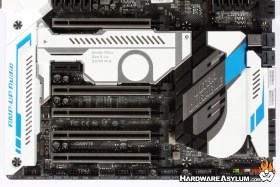 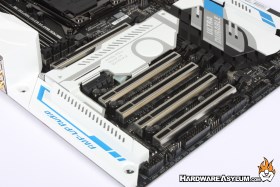 As indicated by the PCI Express layout chart there are a total of five 16x PCI Express slots on this motherboard with four using bandwidth earmarked for video cards.  Slot one is your primary video card slot and will run at a full 16x when only a single card is installed.  Slots four and six are powered by the onboard PLX 8747 48-lane PCI Express switch.

The primary graphic slots will be slots one, four and six which all run at 16x when those slots are populated.  This is also when things get weird.

Slots four and Six in the PLX region both share bandwidth with the M.2 and U.2 sockets and will run at 8x when any of them are populated.  Likewise when a 28 Lane CPU is installed the 16x lanes feeding the PLX chip is cut down to 8x further reducing overall bandwidth.  Slot five is sourced from the X99 Chipset and slot seven will share bandwidth with slot one.

For best video performance you will want to populate slot one, four and six with video cards.  In this configuration there is ample room for dual slot coolers and still remain within the confines of the standard ATX form factor.  Considering that the onboard SSD connections will scavenge PCI Express lanes from the PLX region you will need to expect a lower lane count in exchange for faster storage.

Just for fun I loaded the X99 Designare-EX up with the five AMD 4800 video cards I use to test the Multi GPU Index.  While I wasn’t able to engage Crossfire the system did recognize all of the cards and didn’t require any additional PCI Express power. 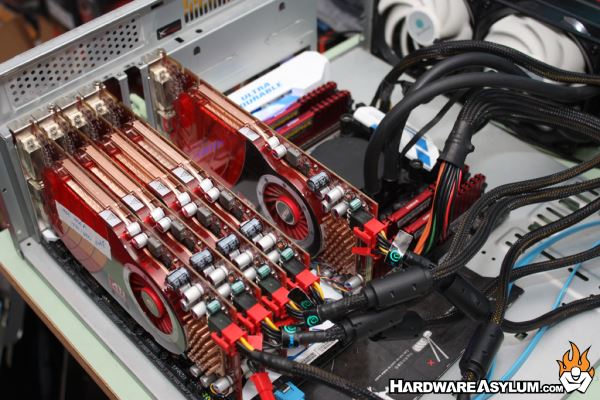