Front panel controls are located in the typical location near the chipset and SATA connections.  Along with the benchtop controls located at the top of the motherboard you will find a Debug LED located next to the front panel connectors.  The small switch to the left allows you to manually select the bootup BIOS between primary and backup.  This can be helpful when overclocking in the event that the system is unresponsive. 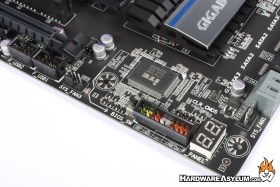 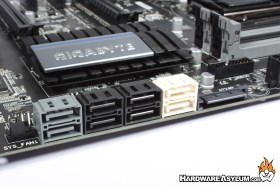 You may notice a SATA power connection to the right of the SATA ports, this provides extra power to the PCI Express slots which can be helpful when running more than one graphics card or when the cards pull extremely high amounts of power.  Again, this is another overclocking crossover to a mainstream motherboard offering. 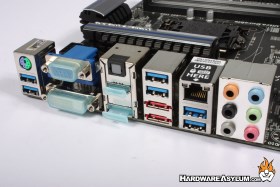 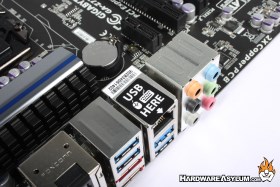 The Z77X-UD4H I/O panel is quite full and rather unique for a mainstream motherboard.  You will find a single combined PS/2 keyboard and mouse plug, six USB 3.0 ports (blue), a single gigabit Ethernet connection, 2x eSATA (sata3 spec) and 8 channel analog audio with digital connections over optical.  Onboard video is handled by 1x DSUB, 1x DVI-D, 1x HDMI, 1x DisplayPort.  Of course installing a discrete video card will enable the Virtu feature allowing dual video paths or the onboard can be disabled completely.

Note: Four of the USB 3.0 ports are controlled by a VIA VL800 chip which is not recognized by Windows 7 and will not work until the driver has been installed.  The two ports located under the Ethernet connection are provided by the Z77 chipset and accessible without a driver. You will see these clearly marked with a sticker
Included Goodies
Mainstream motherboards never come with many included goodies and the Z77X-UD4H is no exception.  You will get everything you see here including a very detailed user manual. 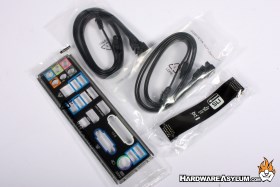 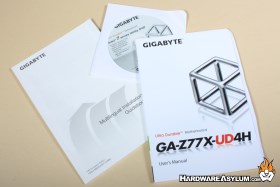 This motherboard does support dual card SLI using the included bridge cable so you will no longer have any excuse for why a secondary nVidia GTX video card isn't in your system.
Motherboards