Motherboard makers will often experiment with different color combinations to try and anticipate what the market demands will be.  The MSI X370 Krait Gaming board takes this trend to the next level where not only are the heatsinks and covers treated with bold white graphics but they also extend across the actual PCB.  It has been YEARS since I have seen this done and in a way I’m glad to see it coming back. 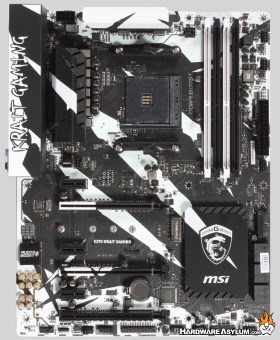 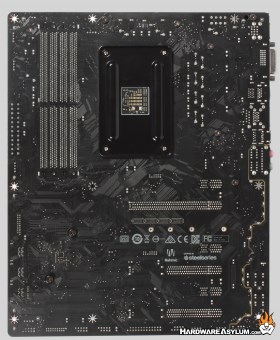 Flipping a motherboard over can tell you a lot about its construction.  Here we can see that the back of the motherboard is virtually devoid of any surface components and features only minimal circuitry including a long translucent trail showing the separation where the audio controller is located.  The large metal square is the CPU backplate and is quite handy when it comes to installing custom coolers.

Dual channel memory comes standard on the Ryzen processor and the X370 Krait Gaming supports standard speed DDR4 modules up to 2133Mhz with overclocking support up to 3200Mhz.  A maximum of 64GB is addressable with the proper module density. 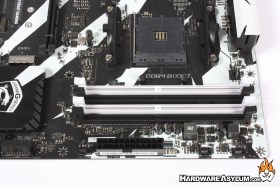 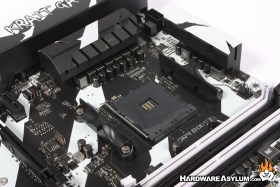 Moving to the CPU you will notice the AM4 ZIF socket for the new AMD Ryzen line of processors.  AMD processors still have pins on the CPU and require this sliding socket type to install the CPU.  On both sides of the socket you’ll find the heatsink retention brackets which are often removed when installing anything other than an OEM style heatsink.

The X370 Krait Gaming comes with a 6+4 phase VRM (total of 10 phases).  MSI doesn’t talk about their military grade components much anymore.  I suspect they are still being used but hidden under their gaming prowess.

Behind the PWM cooler you'll find the CPU Power connection made up of a single 8-pin connector.  Given the location the power cables should be easy to hide in any modern chassis and easy to remove given the space between the power plug and I/O panel.

Internal SATA connections number six and follow the SATA6 connection standard.  Unlike some motherboard makers MSI has ditched SATA Express even though it is directly supported by the Ryzen CPU. 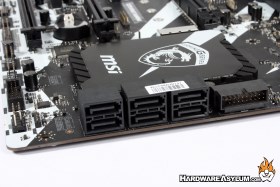 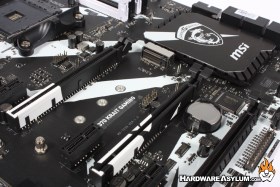 The Ryzen CPU features four lanes of PCI Express dedicated to storage which can be used for M.2 and U.2 anywhere on the motherboard.  MSI has included a single M.2 socket near the middle of the motherboard between the primary video card slots.  It features a metal shield and is keyed for M style drives up to 110mm in length.