Sandra is a software collection of synthetic benchmarks that will give us a basic idea as to what a system is capable of. It should be noted that SiSoft numbers can change depending on what hardware is being tested.  These were recorded using Sandra Professional Version 28.28.2018.9

ATTO Disk Benchmark is a freeware disk benchmarking utility that can test a variety of storage solutions from single hard drives to multi level RAID arrays and solid state disks.  The tests can be broken down to transfer sizes between 512B to 64MB with lengths between 64KB and 32GB.  Testing results are shown on a transfer chart with reads and writes clearly marked. 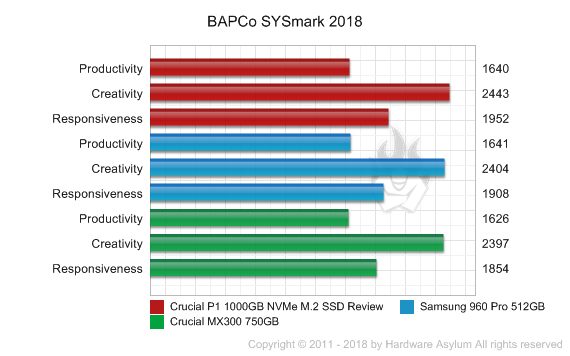 Well how is that for a set of benchmarks.  I’ll be honest, I had to do a double take and even re-run some of the benches because I didn’t believe the results.  As expected the NVMe drives walk all over the standard SATA drive in these tests except for when it comes to real world benchmarks.  As you can see from the scores the results are very close and in the case of PCMark 10 there is virtually no difference.  PCMark 10 is a very different benchmark from PCMark 8 where there was a dedicated storage test.  PCM10 is more of a whole system benchmark and I may not include it in future storage reviews.

You can take a variety of things away from these results.  First is that the Crucial P1 is a more balanced drive and by this I mean the read and write speeds are very similar whereas the Samsung is tuned for read speeds and takes a hit when it comes to writes.  In the PC word most of the data transfer will be reading from a drive but when all of that has no impact on performance you have to wonder “why”?

The system used to test these drives is a standard LGA 2011 X-Series Kaby Lake processor which would represent a typical gaming rig.  I do find it interesting that the Crucial MX300 is holding its own with the faster NVMe drives which sadly means you have to pay careful attention to the numbers to see the actual differences.