One of the latest trends in the enthusiast hardware world is to build high powered small form factor machines.  This might be a response to SteamOS and the promise of playing PC games in the living room or the realization that you don’t need a monster motherboard to build a high-end system.  Regardless of the reason the hardware to build a SFF system has been around for years however, there has been a distinct lack of good cases on the market and has stifled demand.

That is unless you build a case yourself and is exactly what CyberPowerPC has done. 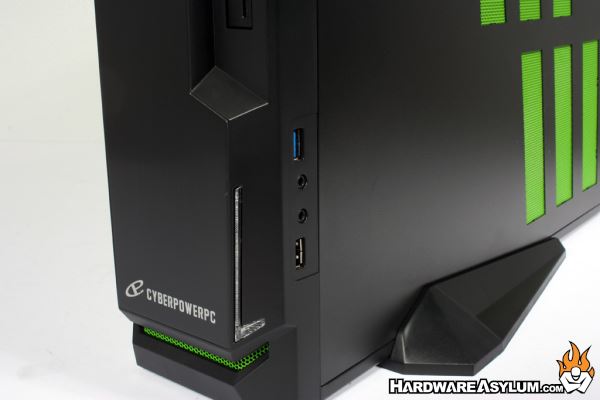 In this review we will be looking at the CyberPowerPC Zeus Mini.  As the name suggests this is a small form factor gaming rig that doesn’t compromise on power.  The Mini comes in two basic configurations.  The first is AMD which follows a red theme and all AMD internals The second is an Intel/NVIDIA version featuring Intel processors and NVIDIA graphics card.  Each chassis is colored to match the internals and we got the green one.

As with any computer build we should start with the specs

There are hundreds of things to consider when building a machine from your processor choices down to what fans you put in the door.  Keep in mind that the system featured in this review is nothing short of top of the line.  In fact, the only upgrades you can do would be to add a higher end graphics card which really isn’t needed.

As with any CyperPowerPC system they provide you with number of different configurations that you can buy outright or use as a starting point for your own custom configuration.  When you visit CyberpowerPC one of the first things you will see after selecting the base model is the system configurator.  From here you are allowed to change almost anything in the build.