Monitoring temperatures doesn’t do anything unless you can control those temperatures.  The redesigned GPU heatsink comes with a variety of new features that not only increase cooling performance but also the complexity of how it is installed.

To help illustrate my point let's take the card part.

Unlike with a traditional GPU heatsink you can’t just remove four screws and expect the cooler to come off.  With iCX you must first remove the fan shroud to gain access to three spring screws that hold the cooler to the heat spreader.

The reason for this will become clear in a moment. 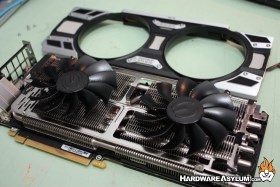 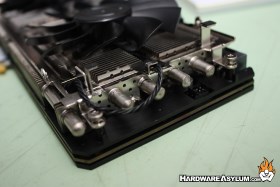 As I have mentioned many times in my heatsink reviews air speed and velocity are key components to how efficient a heatsink works.  With a heatpipe design you also need to create opportunities for air to loiter around due to how large the radiator gaps are.  Doing so can increase cooling efficiency without the need of having more air and allows the cooler to operate with less noise.  This can be done in a variety of ways such as creating a wall using heatpipes, or dimpling the radiator fins.  In the case of the EVGA iCX cooler they have elected to cross drill the fins. 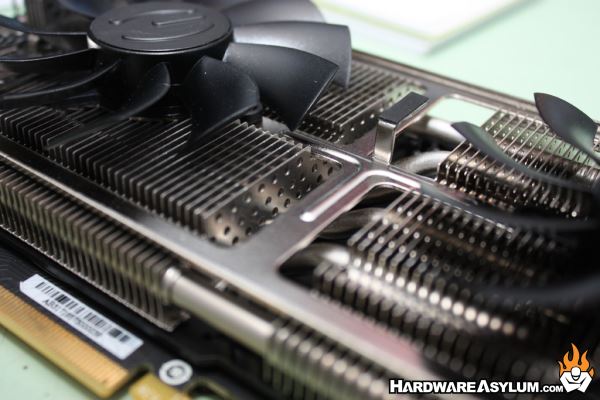 These holes create areas for air to crash and spin which in turn allows more heat to be transferred.

With the hetasink removed you can see two more additions to the new iCX cooler including pin fins molded directly into the heatspreader along with a thermal pad directly over the VRM.  This thermal pad makes contact with a section of the heatsink to allow heat to transfer directly to the radiator fins. 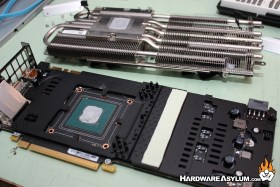 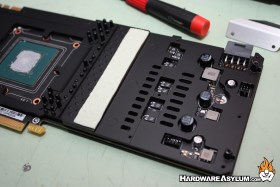 The Power (or VRM) fan is positioned directly over this section of the heatsink and is the most direct way to cool this region of the video card.  Of course the large cast aluminum heatspreader will soak up a considerable amount of heat  and any air passing over it will cool it down so having a dedicated fan just ensures it will be taken care of.

In the past the EVGA back plate was a very decorative aluminum part that not only reinforced the PCB but also protected it from electrical shorts and helped dissipate heat from the backside of the GPU.  The iCX Technology version builds on that concept with a larger cast aluminum heatspreader that is split into two parts. 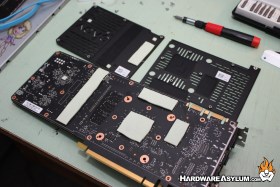 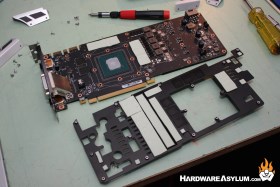 Each side of the back plate is tasked with cooling certain sections of the video card with the help of large thermal pads.  Much like with the VRM and Memory heatspreader the surface comes with a large array of holes to promote passive cooling based on airflow inside your case.

The screws holding the backplate on pass through and interface directly with the heatspreader which is also covered in thermal pads and designed to remove as much heat as possible from every heat producing component on the card.