It is difficult to speak about EVGA iCX Technology and not get excited.  As of this article it is by far the most advanced cooling solution available for any mainstream graphics card and the 11 patents associated with iCX Technology really seal the deal.

The question most people will ask is “Why?”.  Why include nine additional sensors on a high-end graphics card and go through the effort to redesign heatspreaders and how cooling fans operate??

As EVGA describes it for many years a single thermal sensor determined everything about a video card and in the past when the GPU heated up so did the VRM and memory so you could assume everything had a higher cooling demand.  In response the cooling fans would kick on and cool everything down.

With NVidia Pascal the GPU is so efficient that it doesn't have the same cooling demands.  Rest assured the chips still get warm and happen to be designed to run at higher temperatures which allows for the cooling fans to be disabled for silent operation.  This is where the problems start since many heatsink heat spreaders rely on air movement dissipate VRM and Memory heat.

The iCX Technology gives you some insight into what is happening with your video card and allows the software to better control cooling of not only the GPU but the entire video card.

But, Does it Work?

To quickly sum everything up, Yes, iCX works extremely well but not exactly how you would imagine.

iCX and ACX are both EVGA video card cooling solutions and feature an array of heatpipes that extend the entire length of the video card.  iCX Technology allows the cooling fans to work asynchronously but still blows air over the GPU heatpipes allowing the GPU to be cooled like nothing has changed.

Case in point, during my testing I ran the EVGA GTX 1070 SC2 iCX card in some popular game titles and some benchmarking with 3DMark.  During these tests I noticed that the back of the card got quite warm indicating that everything was working as it should and that during these tests only the GPU fan would spin up..

The question I had was if running the VRM fan would actually cool the GPU.  Honestly I knew the answer but was curious to see how efficient it would be.  To make this happen I adjusted the VRM fan to come on sooner while I left the GPU curves alone.  After that I ran through the same battery of tests and noticed that not only was the GPU running cooler but that the VRM and memory sensors also reported cooler temps.  All of the temperature status lights would remain blue and makes you wonder why the cooler wasn’t configured this way to being with. 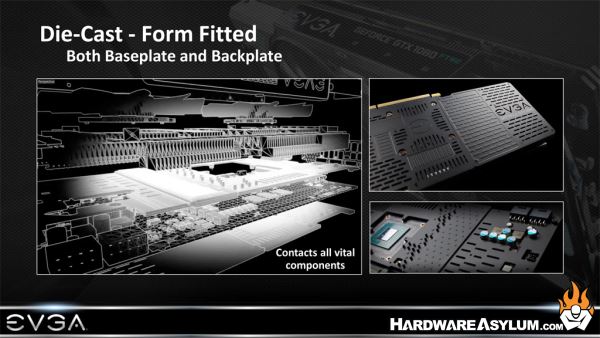 As you may have guessed EVGA didn’t re-invent cooling but did throw a considerable amount of technology at it which allows end users to better monitor their video cards while providing the tools to necessary for the Precision XOC to better control temperatures.

Both are extremely good things.

Here is the kicker though.  iCX only works when the attached aircooler is installed.  If you remove the air cooler to install a waterbolock the additional sensors become moot.  Sure, they still work and you can watch them all day long but you are no longer able to control those temperatures.

Overall this is just something to consider when planning your purchase.  Eventually ACX versions of cards will go away and there might be a time when iCX is dialed back to save money or expanded to accomidate new and improved cards.