Video cards with a factory overclock are a good investment for any gamer since they can offer you better performance with a marginal price premium and a warranty.  Overclocking them beyond this is just fun and a way to get a little more performance from your purchase.

Overclocking the GTX 970 G1 Gaming is rather straight forward.  You simply increase the core clock and closely monitor the frequencies using a program like EVGA PrecisionX then run a few performance tests.  It is important that you monitor the clocks since the variable boost clock can push frequencies higher than you may expect based on system load and temperature.

For these tests we were fortunate to get a rather decent overclock of 1338Mhz Core and 1753Mhz Memory with a boost clock ramping things up to 1539Mhz.   The Boost clock is difficult to watch however using a tool like PercisionX can give you those numbers in realtime. 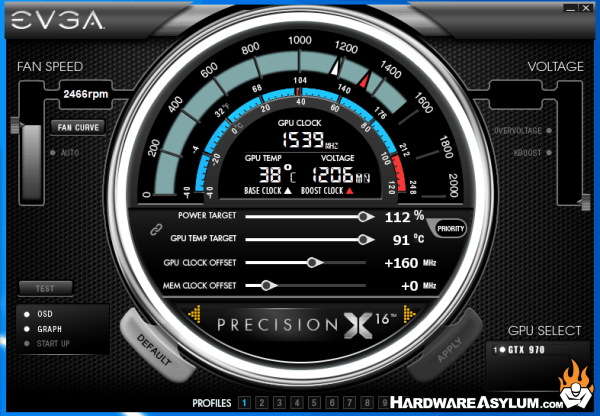 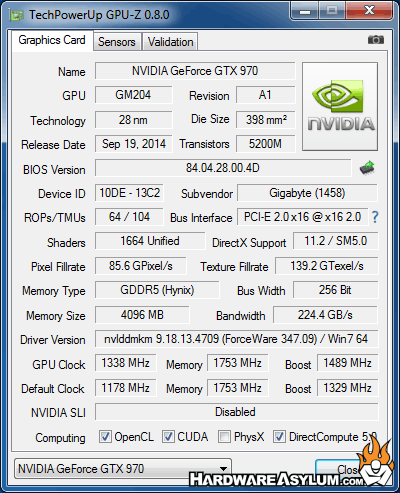 As we have mentioned many times overclocking isn’t a guaranteed thing and while we were able to run at 1500Mhz+ that isn’t to say your card will do the same.  Likewise if you are in the market for a Super Overclocked video card keep in mind you are already getting a healthy factory overclock so anything above that is gravy.

The overclocking results are impressive and yet a little disappointing.  On the positive the GPU scaled extremely well posting a total stable 1500Mhz+ overclock with plenty of room left in the power target (watercooling with a volt mod anyone?)  However, on the downside the real performance benefit of the Maxwell architecture is memory bandwidth and adjusting memory frequency on this card was not available.  In fact with our sample the slightest adjustment would cause the driver to crash every time.  Thist limited the overall overclocking performance and why the scores aren't any higher.

We mentioned power target in this conclusion and it is important to note that NVIDIA cards define their boost clocks based on two major factors and one limiting factor.  GPU Temperature and Power Target (how much current is going to the GPU)  If both of these factors are below their respective thresholds the boost clock will continue to rise until the boost percentage is reached.  As overclockers we watch the power limits and as long as they remain under the limit there is still power available for overclocking.

Bottom line, if you can find a way to adjust the core voltage (either through hardware or software) there is a good chance this card can overclock considerably more.