Despite the size of the Windforce Cooling solution there are only 6 screws holding the cooler to the PCB and two power connections to power the fans and LED light.  You will find four spring screws around the GPU hold the cooler in place and two more around the VRM to ensure good thermal adhesion. 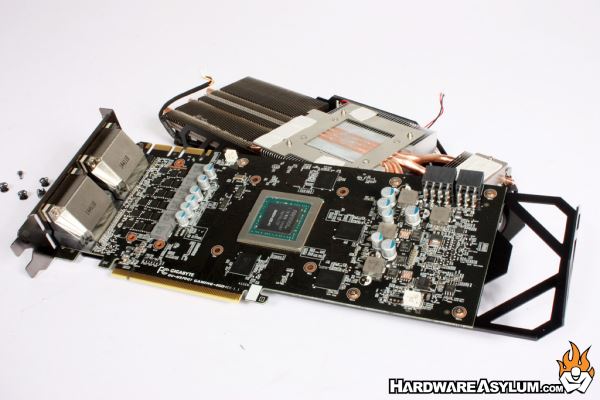 The Windforce has become a common cooling solution on all of the high-end Gigabyte video cards and is often regarded as one of the coolest factory heatsinks on the market today.  Each video card gets a special heatsink design however; there are some very obvious similarities between the designs.

This version of the G! Gaming card features a four heatpiple cooler with core contact heatpipes and separate cold plates for both the memory and VRM.  This ensures that the GPU gets priority cooling while still addressing the cooling needs of the memory and VRM. 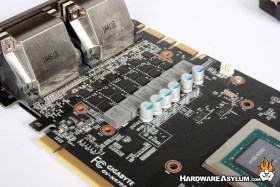 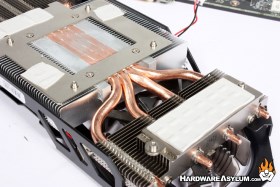 One of the limiting factors that determine how much a video card can be overclocked is the size of the VRM.  On the Gigabyte GTX 970 G1 Gaming you will find a total of 6 power phases along with some other power circuits opposite of the GPU for other board functions.  While the PCB is following the reference layout the board is still a custom design with special components.