Even though the Gigabyte GTX 1060 Xtreme Gaming is inspired by a reference design PCB there are some custom elements added including Ultra Durable components, headers used to control the RGB lighting effects, HDMI Ports and what appears to be a revised VRM. 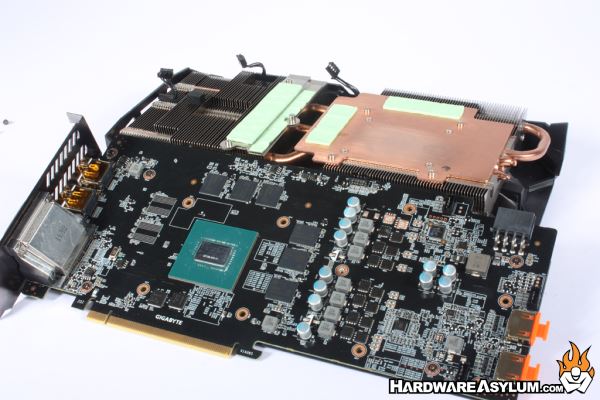 There are four spring screws and three standard screws holding the Windforce 2X cooler in place.  Removing these will release the cooler but leaves the backplate attached.  Four additional screws are used to secure the backplate to the PCB and are accessible once the cooler has been removed. 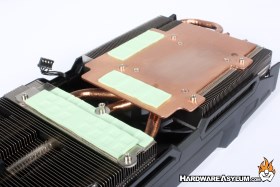 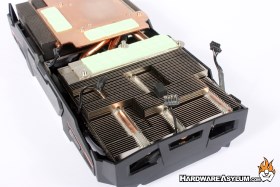 The Windforce has become a common cooling solution on all of the high-end Gigabyte video cards and is often regarded as one of the coolest factory heatsinks on the market today.  Each video card gets a special heatsink design with some very obvious differences between the designs.

This version features a triple heatpiple cooler that interfaces directly with a large copper cold plate for GPU and memory.  While the GPU and memory share the same coldplate the VRM is cooled by a separate section and attached to the secondary cooling tower.

One of the limiting factors that determine how much a video card can be overclocked has always been the size of the VRM.  On the Gigabyte GTX 1060 you will find a total of 7 power phases.  The overall VRM design is different from other GTX 1060 cards I have seen and is actually one thing I like about Gigabyte graphics cards, custom PCB design. 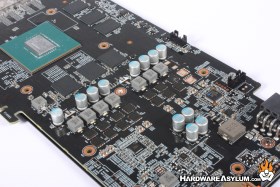 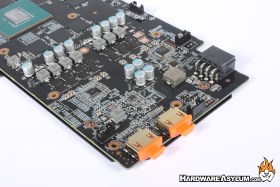 Along the back edge of the card you’ll find the two extra HDMI ports.  In this photo you’ll also notice that we have four power headers for the Windforce cooler.  I’m just going to silently assume they are for the RGB lighting effects.