Testing a monitor is similar to testing speakers.  You can talk about specs all day long but at the end of the day most of what is said is purely subjective.  I might say something is great and someone on YouTube will say it sucks so it will be important to remember that opinions are just that and even if opinions are backed by tests and benchmarks the results can be skewed.

When I setup this monitor for testing I did so by swapping out my HP ZR30w 30” monitor that I’ve been using on the Hardware Asylum Labs test bench.  The HP panel had been a stable in the lab for many years and has worked great.  You would think that a 32” wide screen would be bigger than a 30” but as you can see they are pretty much the same. 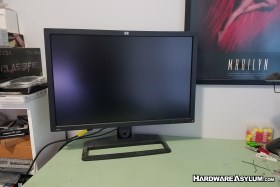 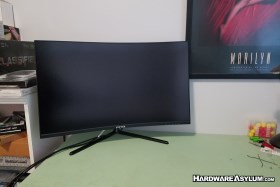 The Viotek is slightly wider and not as tall while the HP 30" features wider bezels and is taller with an adjustable stand.

In terms of resolution, the Viotek is a 2k panel @ 2560x1440p.  While the screen ratio is different they are still pushing the same horizontal resolution of 2560px.  Some of the other differences are the panel selection.  The HP features an IPS panel with a 1000:1 contrast ratio and while not great for gaming it has a wide viewing angle with a 60Hz vertical refresh.

The Viotek has a slightly better spec featuring a VA (Vertical Alignment) panel with over 3000:1 contrast ratio and a 144hz vertical refresh.  The added screen refresh is a great feature to have as it will reduce screen tearing and allow you to uncork your high-end graphics for smoother gameplay.  AMD FreeSync is supported allowing the panel to dynamically change the vertical refresh on demand and Viotek claims the monitor is also G-Sync ready.

“G-Sync ready” does not mean this is a G-Sync panel, in fact my RTX 2080 Super didn’t recognize the panel as being G-Sync anything and didn’t allow me to activate or force the feature.  Most FreeSync panels have trouble passing the formal certification process anyway so I didn't bother testing the adaptive refresh.

For testing I spent several hours playing a variety of games on the GNV32DB and enjoyed every minute.  The majority of my time was spent playing through Doom along with some time in the new Watch Dogs and a few hours in Seven Days to Die. 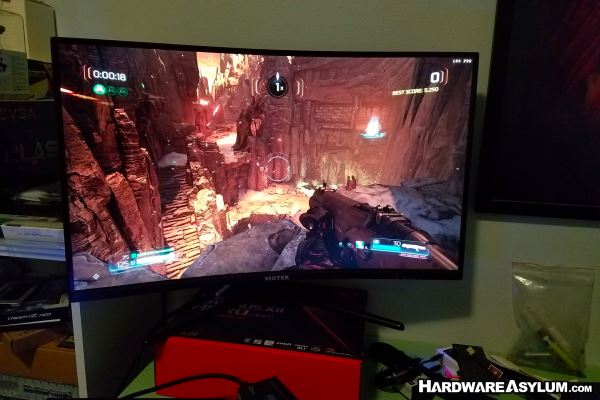 As you will notice I had to block the monitor up on the test bench using an ASUS Z490 motherboard box.  Of course an adjustable stand would have resolved this rather quickly but, more on that later.

Picture quality was excellent with blacks being rendered correctly and the high contrast ratio adding depth and detail to my games.  The panel does not support HDR but there was enough dynamic range to clearly see game details.  I would attribute this to the higher contrast ratio and fast vertical refresh.

When it came to refresh rate I did witness some slowness in response time.  Doom was running over 200FPS and the monitor gave me an optical uneasiness that is typical when the game and monitor are running at different frequencies.  Optically speaking this was less of a problem in other games where the framerate was slower and offered a no visual stutter or tearing.

One annoying thing was that when running a game outside the native resolution (eg Not 2560x1440) that aliasing made everything extremely blury and in some cases unreadable.  This hasn't been a problem on my other monitors and I suspect it might be a driver or firmeware issue in the monitor.  Of course, kicking the resolution up to 2560x1440 resolved the issue and might be something to consider if you aren't using a high-end video card.

The final item I noticed is that the Viotek GNV32DB took awhile to wake up.  When I would leave the system idle the monitor would go to sleep per the Windows 10 sleep settings.  Wiggling the mouse of hitting the "Any Key" on my keyboard should have woke the panel up immediately but instead I was sitting there waiting a couple seconds while the monitor registered the input and powered on the monitor.