It would seem that everyone has a custom utility for their video cards.  Some are good, some are rebrands of Riva tuner while others claim to be completely custom and uniquely designed to only work on cards from that manufacture.  When it comes to overlcocking any tool will work on any card with the chance that some advanced features may not be available.

Zotac has developed Firestorm for their video card lineup which looks and works very much like Afterburner.  GPU and Memory clocks are shown on the left in a radial graph.  At the right you’ll find a similar graph showing GPU Temp and Fan Speed.  In the middle are all of the controls for the card starting with GPU Clock, Voltage, Memory Clock, Power Target, GPU Temp Target and Refresh Rate Overclocking. 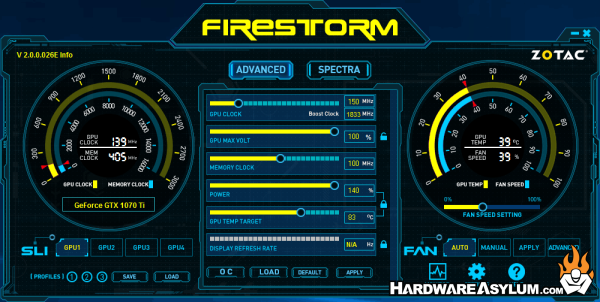 There are additional controls for multi GPU setups, profiles and the ability to load custom profiles similar to the one I got from Zotac that was specific for the GTX 1070 Ti AMP! Extreme.

Video cards these days have become a bit of a bling factor for system builds.  The better your video card the more respect you get at LAN events and more inclined you are to do some customizing with your PC.  RGB LEDs are a big part of a modern PC and just about everything has a RGB controller.  Motherboards had them first, then Memory (though some may argue that memory LEDs are older than time itself), Sound Cards and even Video Cards have RGB LED controls. 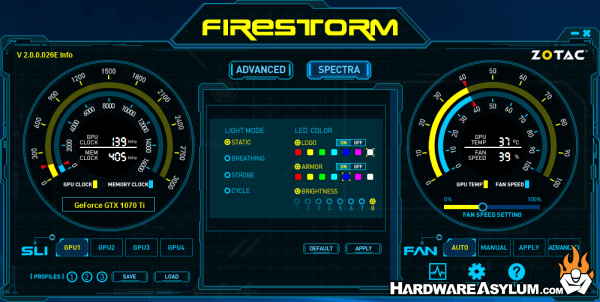 The different RGB modes are pretty simple.  You have logo and armor zones allowing you to change the colors in these two locations independent of each other.  The lighting modes apply to the entire card and, to be honest, I’m a Static or Cycle kind of user and tend to ignore the rest.

Below you’ll find a few samples of the different colors.  Personally I like having a color distinction between the logo and card as that gives it some additional distinction. 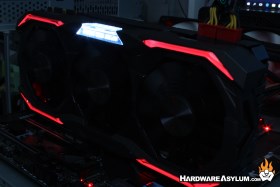 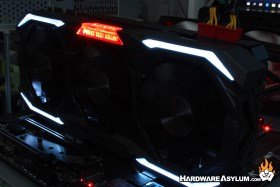 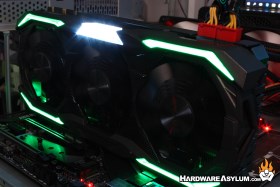 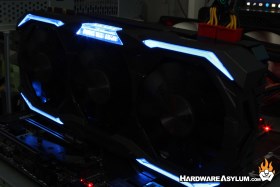 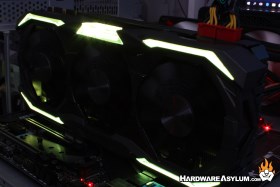 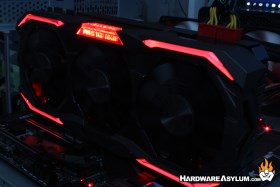 Yay, pretty colors even if they are semi bad photos.