The Zotac GTX 1070 Ti AMP! Extreme is a big card, and I mean BIG.  The cooler is a triple fan design and will occupy two and a half slots on your motherboard (for sanity sake call it three).  Ladies will love the 12.8 inches of length making it one of the longest nVidia based cards on the market.  To help ram the size of the AMP! Extreme home the card is also taller than most at 5.83 inches.

Needless to say, save this card for a full sized case. 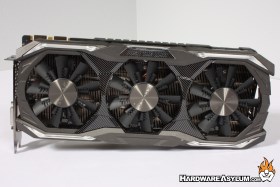 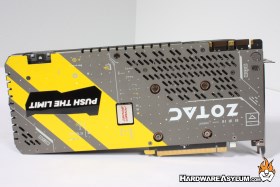 Back plates have become a sudo standard on video cards over the past few years and actualy serve a purpose.  Most will note that a decorative backplate helps to pretty up your system build and the bold yellow sash and “Push the Limit” text really describe what the AMP! Extreme is all about.  However, this particular backplate is also a major source of reinforcement adding stiffness to the PCB for better heatsink mounting and additional support for the extra weight.

Video output is comprised of a single dual link DVI video output combined with a single HDMI and three Display Port connections.  Four of these can be used at the same time allowing you to run 3-way surround and still have a spare monitor for use outside of the game. 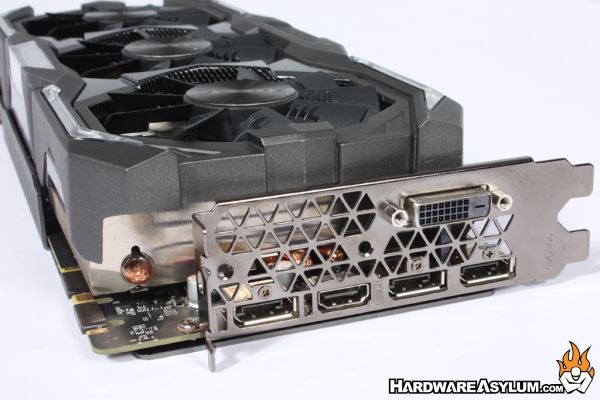 3-way and 4-way SLI are possible using the GTX 1070 Ti given the dual SLI bridge connections found at the top of the card.  While running more than two cards is possible there has been a fundamental change in how NVIDIA supports SLI which limits full support to only two cards.  This was done to facilitate the use of HB (High Bandwidth) SLI bridges that require both SLI fingers and to increase quality by supporting the configuration most gamers use.

Given that this card is taller than most you will want to plan your build accordingly.  For instance if you plan to run SLI be sure to get two cards at the same time, One because finding them can be difficult and two because you can’t use a solid SLI bridge if the cards are not level across the SLI fingers.

The Zotac AMP! Extreme features the Triple Fan IceStorm cooling solution.  All of the fans will spin to offer maximum performance and to help increase airflow.  The fans also feature a unique blade design.

Rotational fans capture air and move it in the direction of the fan blades.  Due to centrifugal force the air will slide away from the center of the fan and exit near the tip.  This is why air will exit in a cone shape and not directly downwards.  You can alter how the air reacts by changing the blade design and is what Zotac is doing with the IceStorm fans. 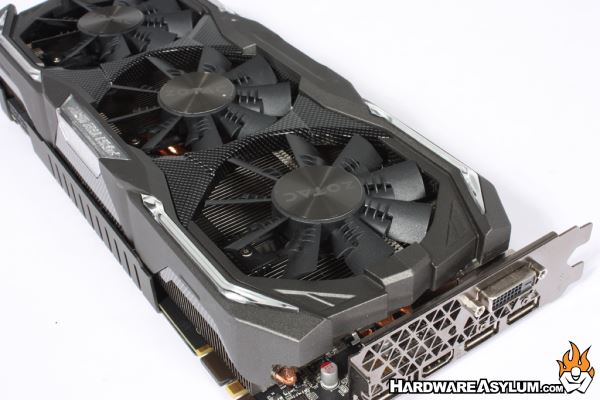 The extended blade near the fan center is longer than the rest and offers more surface area and a vertical block to prevent air from moving past and to the fan edges.  The idea is to provide a more even airflow across the cooler and increase cooling efficiency.

I will say this works in theory.  What is difficult to tell is that if overall cooling performance is increased more by the fan design or the fact that the cooler is extremely oversized.