For a case that weighs almost 50 pounds the build quality is surprisingly simple.  Not counting the drive cages there are five major panels that make up the DG-8.  These panels run the full length of the case to simplify the assembly process and make the case extremely sturdy.

You will find there are plenty of options for cable management with this case with the preference to have all of the wires hidden behind the motherboard panel.  There is a little over an inch of space between the motherboard panel and case edge and slightly more space once you factor in the curvature of the back panel. 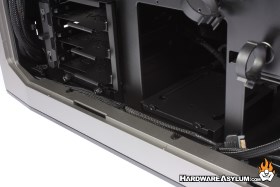 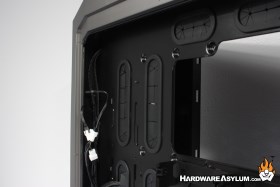 Despite the ample spacing I did notice a few potential issues.  EVGA intended for all of the PSU wires to pass through to the back of the case using a large opening at the bottom.  From there wires can spider off but will have to pass over a multitude of attached drive trays to access the pass through points.  If these drive trays are empty you can simply remove them however a populated tray will require a much longer routing path with the risk of running out of cable.

Likewise I also noticed that the default routing for the USB and front panel connections made the cables too short and didn't reach my motherboard.  Resolving the issue required rerouting the wires to the front of the motherboard tray instead of from the back.

Both swing doors are removable.  To remove the front panel you need to locate a plastic slide lock near the expansion slots, push in the plastic stop and slide the lock down.  This will release the hinge pins allowing the door to be removed. 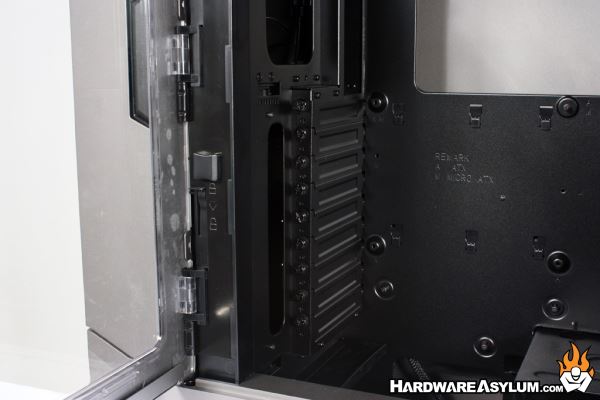 The left side door is also removable by simply lifting up and off the hinge pins.  Both door fans have a buss connector on the inside panel that not only allow for quick removal but also an easy fan change if you prefer to use a different style fan.

I studied and analyzed the DG-87 for several days trying to mentally map out some practical modifications that could be done.

An obvious mod would be a simple color change.  The DG-87 features a metallic gunmetal grey finish that looks extremely good on both the plastic and metal parts.  I wouldn’t recommend painting the outside of the case due to the prep work involved however, the inside of the case is begging for some color.

For this I might suggest removing the motherboard tray and painting that along with the metal mesh attached to the underside of the top panel. 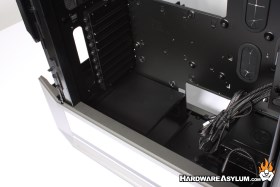 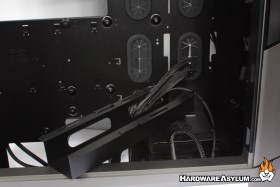 If you are feeling especially crafty I would also suggest attaching a metal cover to separate the basement from the main chassis area.  Right now EVGA offers a plastic slide to cover the PSU but I feel something solid and permanent is needed and really should have been part of the original design.

Of course paint that to match the motherboard tray.

Everything else has already been accommodated by EVGA including an excellent airflow pattern through the case and the option to use triple fan radiators at both the top and right side of the case.  As I mentioned before a new bracket will need to be fabricated to run a dual loop watercooler and if you are using watercooling gear other than EK you’ll likely need to break out the power tools and drill a few holes anyway.