Aircooling remains one of the most economical ways to cool computer components.  There is no need for complex pump assemblies attached to radiators or costly fluid running through tubes to strike phj34r into the hearts of novice computer builders.  In fact most low-end processors come bundled with a heatsink allowing you to save a few bucks when putting a build together.  However, there is a fatal flaw with OEM heatsinks as they are sized for warranty support with no headroom for overclocking or poor case ventilation causing your system to run hotter and generate more noise.

In this review we will be looking at the Cooler Master Hyper 212 RGB Black Edition.  This is a tower style heatpipe cooler designed to fill all modern processor platforms including some of the latest Core i7 and i9 CPUs. 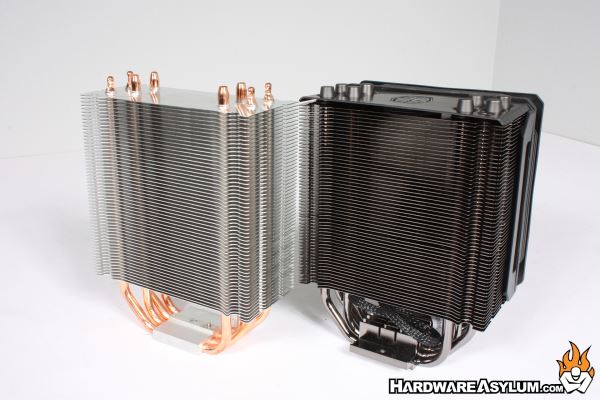 For those of you “new” to the PC building world the Cooler Master Hyper 212 is a classic design that has largely remained unchanged for over 10 years.    The original Hyper 212 was a dual tower design and one I reviewed back in April 2008.  It was a very impressive cooler for the time however, I wasn’t a fan of the mounting system.  Performance was extremely good offering a 20c temperature drop over the OEM Intel cooler.

Of course the most impressive part of the Hyper 212 was the price and for a little over $30USD you could get an aftermarket CPU cooler that allowed some overclocking awhile offering better performance and extremely low noise.  This combined with excellent performance is what kept the Hyper 212 in the market for this long and remains as one of the most popular coolers for the budget minded PC builder.

The Hyper 212 RGB Black Edition is refined version of the original Hyper 212 but only in appearance.  Overall design is remarkably similar with four long heatpipes attaching to a thin fin radiator and a core contact heatpipe design. 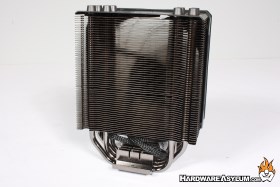 Historically the Hyper 212 was released “raw” with uncoated metal parts as an attempt to keep manufacturing costs down.  The Black Edition cooler features a black coating and cover plate at the top of the cooler hiding the ends of the four heatpipes.

The fan is a 2000 RPM RGB fan with PWM control.  There is a standard 4-pin RGB header attached allowing the fan to be hooked into a motherboard controller, external controller or the included controller ensuring that there will be no excuses for not having the fan lit up. 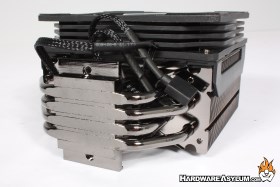 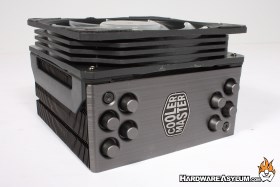 Direct Contact coolers have been around for years and was one of the selling points of the Hyper 212.  As the name suggests the heatpipes make direct contact with the CPU allowing for faster response times at the expense of capacity.  For most builds this will only be a problem under overclocking or if your case has zero to no cooling.

The overall direct contact design has the heatpipes spread out across the cold plate with small gaps between the pipes.