Fan operation is a balance between Flow Performance and Noise.  Generally speaking the faster a fan spins the more efficient it becomes at the expense of making more noise.  Some of this noise comes from air as it passes through the fan while other sources are harmonic and produced as the fan passes over an obstruction.  By adding more blades you reduce the harmful noise by converting it into something less pronounced such as making a hum over a pronounced thump.

In looking at the MasterFan Pro specs you will see that the Air Flow fans spin at a lower rate and produce the same amount of noise as an Air Pressure fan spinning much faster.  The faster spinning fan might be moving less air but is generating more pressure.  Some is due to how fast the fan is spinning while the rest can be attributed to the fan profile having less of a gap between the fan blades.

So what are we are looking for in a fan?  In a word, Balance.  We want the fewest RPMs for noise control but also want to move the most air to ensure the highest quality cooling performance.  For a computer case with very little restriction you can get away with going for the highest CFM you can get.  However, for CPU cooling performance we want pressure.  Pressure translates into airflow and the more air you can move the more heat you can handle.

I have created two tests to see just how well the Cooler Master MasterFans stack up against themselves and against some other fans I have floating around the lab.

The first test is a simple cooling efficiency test using a 120mm AIO watercooler with a performance radiator.  To get the best performance from this cooler many enthusiasts use two fans in a Push and Pull configuration which is mostly done to compensate for a fan that cannot flow enough air.  Using more than one fan increases the noise footprint so whenever possible you’ll want to limit how many fans you are using.

I won’t be testing decibels but needless to say fans spinning at full tilt make a bunch of noise and the lower the pressure the more noise it made. 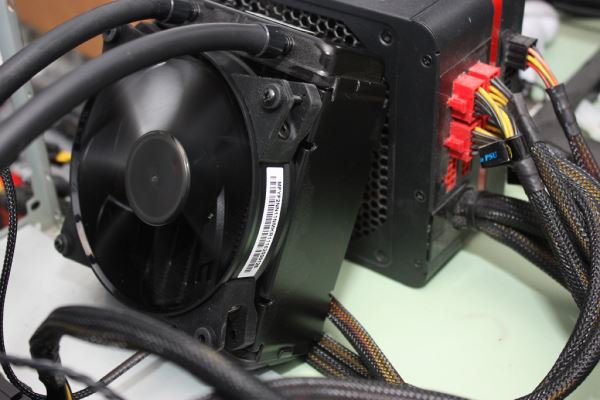 All set to P Mode (Performance)

When testing heatsinks the fan used can play a huge part in how efficient the cooler is.  Fans that can push more air tend to provide better performance and for this test I picked the thickest radiator I could to provide the best result.

During the test I noticed that while the Air Flow fan was spinning quite fast a good majorty of the air wasn’t making it through the radiator and leading to the rather high CPU temp.  Had the fan not been in Performance Mod I suspect the CPU would have overheated.

Both the Air Balance and Air Pressure fans did quite well in this test and had very little air leakage due to their blade configuration.  During my review of the Cooler Master MasterLiquid 240 AIO cooler I noticed that when the Air Balance fans were in S Mode a good amount of air was leaking back through the fan.  This went away when the fan speed was increased and is why speed plays a huge part in overall cooling performance.