I wanted to have a little fun testing the new Cooler Master MasterFan 120 Pro fans and after watching other reviewers struggle to illustrate how one fan was better than another I decided to create a fan testing rig.

The following is constructed from a 10x10x10 cardboard box and all of the edges have been sealed with packing tape and hot glue.  I cut a 120mm hole into the side of the box and inserted a copper wire at the top to act as a guide for when installing the fan.  Each fan is held in place using a rubber band that wraps around the box and while it may sound crude it works extremely well. 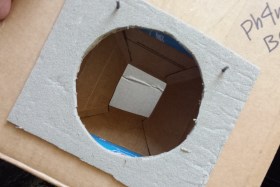 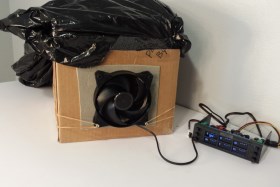 For this testing rig I wanted to simulate a fan pushing through a radiator and while I could have mounted a rad inside the box I felt it better to just simulate the restriction with a tapered hole.  Behind the fan is a 6x6x6 chamber with a tapered edge that exits to a 2x2 square which is roughly half the size of the opening.  The restriction chamber was then glued down to create an airtight seal.

Around the fan you will find a panel of sticky back insulation used to create a seal between the fan and the box.  This will ensure that all of the airflow and pressure is directed inside the testing chamber or back out the fan.  At the top of the box an 8x8 opening was cut to allow air out of the box and this was then covered in a 40 Gallon trash bag which was then taped down to create an airtight seal.

Overall what we have is a rig to test how well a fan can force air through a restriction.  The more pressure the fan exerts the faster it will fill the trash bag.  A simple timer can be used to measure performance and the 40 gallon bag can give us a constant to measure against.

Given that this method of testing is better viewed I created a video. 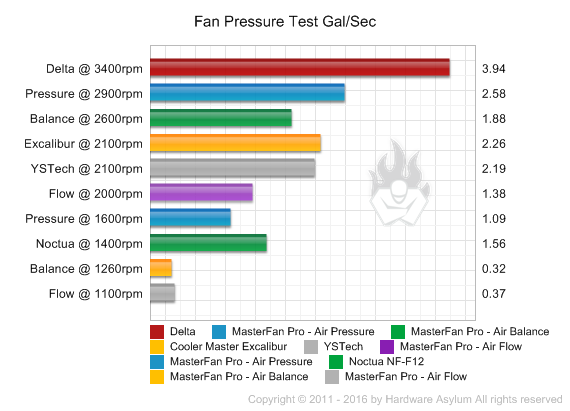 Sadly two fans, the MasterFan Flow and MasterFan Balance were unable to overcome atmospheric pressure and couldn’t fill the 40 gallon bag.  Those fans were set at their S Mode making them better suited for case cooling.  This condition improved when the fan speed was ramped up.

Two fans in this test also showed us how just powerful a fan can be.  The 120mm Delta fan spinning at 3400 RPM only took 10 seconds to fill the bag and had so much pressure that it expanded the bottom flaps of the testing rig.  The Cooler Master MasterFan Air Pressure fan running in P Mode (Performance) was also able to expand the box and did so at a much lower RPM.