When RGB LEDs became popular, "again", there was a mad scramble to create the most unique and most over the top implementation to secure the sales and grab headlines.  Initial versions were pretty amazing and while the software to control the lights was primitive you could easily see the potential that RGB LEDs was going to eventually have.  The interesting thing about companies getting exciting over a new technology is how competitive they can be when it comes to pushing the limits.

On the motherboard front we saw motherboards with simple edge lighting explode into a fully augmented system with lights on every expansion slot, near every socket and multiple headers allowing systems to completely sync up.  On paper this seemed like a great idea however, in reality, users quickly realized that 90% of the lights were hidden or obscured making the extra lighting somewhat pointless.  Combine that with bad software and you have a recipe for disaster.

While things have calmed down when it comes to computer hardware with RGB lighting effects the practice is still growing in the accessory market.  These are the computer components that you can see and it makes sense that they lead the charge when it comes to adding LED bling in your rig. 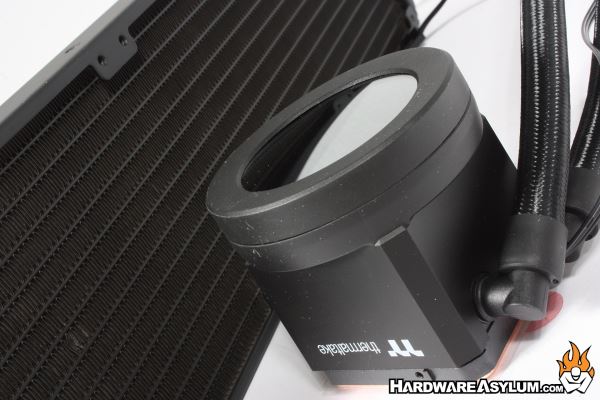 In this review we will be looking at the Toughliquid Ultra 360 from Thermaltake.  This cooler is virtually identical to the Toughliquid 360 ARGB but, takes things up a notch when it comes to lighting effects and animated graphics.