The Aorus M3 is slightly smaller than my XTD but still a typical medium height with a longer profile.  The primary surfaces are smooth with nicely textures rubber sides for an easy grip. The primary buttons are contoured for comfort as well. Aorus has chosen Japanese Omron switches rated to 20 million clicks.  DPI controls are nicely placed behind a rubber scroll wheel with everything easy to find on the fly. 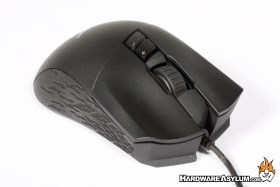 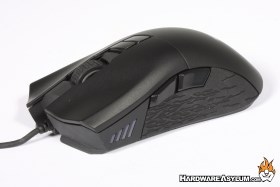 On the side there are two additional thumb buttons and a visual DPI indicator that reminds me of the classic mobile phone bars.  This is one of the better implementations of the thumb controls. Each button is contoured for a resting thumb and easily found and triggered on the fly.  I mapped to melee and bayonet charge for some BF1 fun!

Lighting is controlled by the same RGB Fusion engine and lights up the Aorus logo. It’s a pretty simple and hidden by the average grip.  For many that may be a plus but I felt there was plenty of room for ground effects or accent lighting to make the RGB pop. 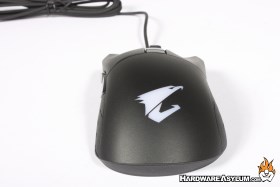 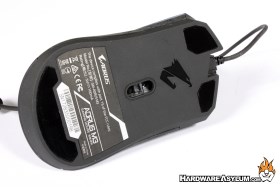 For the sensor, Aorus has chosen the PIXART 3988 6400 DPI optical engine. This sensor is also found in my go to mouse, the Roccat Kone XTD.  Typically described as snappy and accurate, this optical engine is often chosen by pro FPS players looking for a quick accurate glide.  As an added bonus, the M3 ships with two extra sets of mouse feet.

Read on for more on testing the AMP300 Hybrid Gaming Mouse Pad and my detailed thoughts on the Aorus system. Cant wait? The Aorus M3 is comfortable if a bit feature light.  In practice, I found it felt a bit lighter than I am used to making it drift in the heat of battle.  At the more entry level price point it has all the critical features without breaking the bank.