AORUS is Gigabyte’s premium gaming brand which can apply to a wide variety of products from peripherals to video cards, motherboards and even gaming laptops.  These represent some of their top level product offerings. Today we will be looking at their latest line of Aorus gaming peripherals; the Aorus K7 Gaming Keyboard, Aorus M3 Gaming Mouse, Aorus AMP300 Hybrid Gaming Mouse Pad and the Aorus H5 Gaming Headset.

With the Aorus line of gaming peripherals, Gigabyte is following the latest trend of releasing products in batches designed to work together through a common visual theme and unified driver architecture.   The advantages of owning a common set of products, like these, are great as you'll get fewer driver issues, unified product synergy, visually matched theme and sometimes even cross functionality.

How do these products stack up?  Let’s take a look at them individually and also their common driver suite and find out!

The Aorus K7 Gaming Keyboard is the latest keyboard to wear the K7 moniker so frequently awarded to the top Gigabyte keyboard designs.  The redesign brings a more traditional mechanical keyboard layout and a beautiful RGB fusion back lighting system. 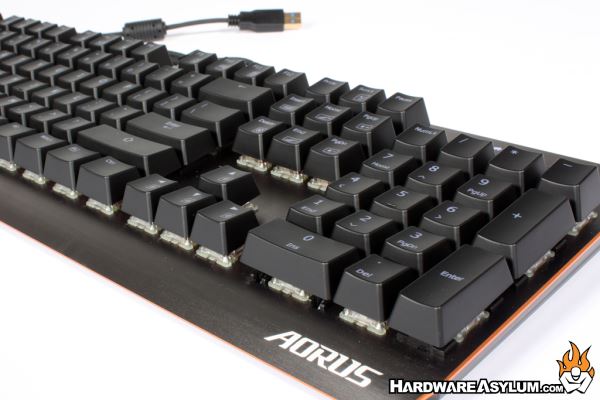 The Aorus K7 looks a lot like the well regarded XK700 design only subtly streamlined with an updated brushed grey base.  The size is slightly smaller though still a full 104 key design. Currently the Aorus K7 only ships with the popular Cherry MX Red switches.

For FPS gamers, Gigabyte has included a set of 8 bright orange WASD keycaps with a nice wire key-cap removal tool. The keycaps do make an impression with their color but are otherwise unmarked.  This is an interesting decision for any keyboard equipped with RGB back lighting given that you could also simply change back light color.

AORUS is a premium gaming brand focused on customization and personalization for all users but most importantly gamers.  Described as the pinnacle of hardware excellence, the Aorus brand has previously been offered on Gigabytes high end motherboards and graphics cards.

Designed by gamers for gamers Aorus products are not designed in a vacuum but with active participation from pro gamers and the Gigabyte community.