Before we get too much deeper let’s take a look at Patriots high performance mouse pad, the Viper Gaming LED Mouse Pad.  I have to be honest; I have found Led mouse pads pretty gimmicky in the past.  Though I still love the Razer Tron implementation. (Maybe worth a Google?). 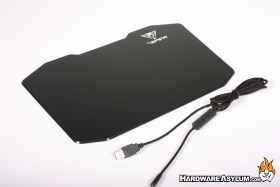 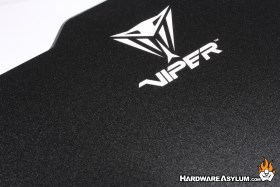 The Viper Pad is a larger polymer mouse pad measuring in at 35.35 x 24.9 xx .55 cm (13.9 x 9.8 x .21 inches). Power is provided by a proprietary USB cable that has an inline light controller. The cable is a detachable micro USB cable with a nicely braded cord.

I like the detachable function but worry that replacing the cable might not be as simple as a standard micro USB cable if the control was in the pad.

The primary feature is the 6 LED lighting zones including the larger Viper logo in the top right.  Bring on the specs! 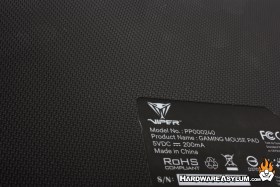 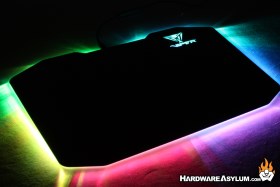 High grip rubber covers most of the back surface and holds the pad firmly in place even under frantic use.  This pad just does not move.

The pad is lit with a ground effects style but still remains pretty low profile.  As you can see the lighting effect is quite bright.  The effects available are: Breathe, gradient radar clockwise or counter clockwise, gradient, gradient breathe, static or off.

The ability to control the lights manually is pretty nice but I do wish they had made it possible to sync with the Viper V570.