The Gigabyte X79 UD3 follows styling set forth during the launch of the P67/Z68 and features a matte black PCB and black expansion slots.  Typically the UD3 does not come with any accent colors aside from the light grey you find on the two heatsinks. 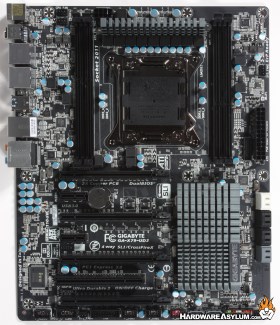 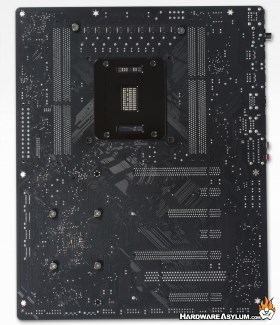 Flipping a motherboard over can tell you a lot about its construction.  Here we can see that the back of the motherboard is virtually devoid of any surface components except for a few PWM parts located around the CPU.  Due to the size of the LGA2011 socket the CPU reinforcement plate is considerably larger with a few cutouts for surface resistors.

Looking closer at the PWM area we can easily count the power phases but more interesting is the heatsink mounting holes and how they appear to be covered.  LGA2011 uses a different heatsink mounting method that doesn't attach directly to the PCB.  Instead the heatsink will screw directly to the CPU retention plate and avoids touching the motherboard completely.  Because of this you will find a gasket covering the holes and preventing anything from passing thru. 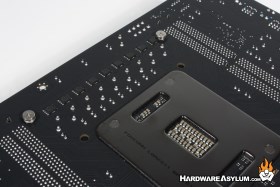 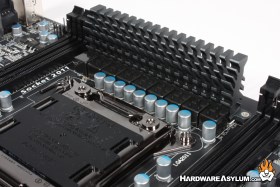 Of course this can be remedied if you are using a custom watercooler or need to secure an evaporator or LN2 pot to your motherboard.

The PWM design is based on a new Gigabyte technology called 3D Power.  While the PWM may visually look the same it is based on a new hardware design that controls 3 major aspects of the motherboard, Memory A, Memory B and CPU.  These power zones are accessible in the UEFI and with the included 3D Power software.  Overall this roughly breaks down to eight power phases for the CPU and two for each pair of memory slots. 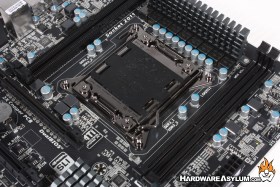 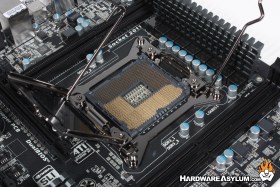 LGA2011 is roughly 20% larger than LGA1366 and is held in place using an entirely new retention system.  The new system locks the top plate down on both ends of the socket ensuring that the CPU makes good contact across the entire pin grid.  Be extremely careful installing your CPU, these pins are very small and there is a lot of CPU to deal with.
Motherboards