Skylake was arguably one of the most anticipated processors of 2015, so much in fact that there were worldwide shortages of the Core i7 6700K and a slew of new motherboards which started some rather edgy trends.  I tried to get a 6700K at launch but, were completely sold out in the states and online price gouging reached global proportions as demand for the CPU rose.  As a result I settled on the Core i5 6600K for the Z170 generation and rather enjoyed it.  Overclocking was much better due to changes in the CPU architecture and I only broke one due to the thin(ner than it should be) CPU PCB.  The successor to Skylake, Kaby Lake, has proven that there is still excitement for new processor architectures even if the changes are rather incremental.

In this review I’ll be looking at the new Aorus Z270X Gaming 5 motherboard by Gigabyte.  The Aorus brand has been with Gigabyte for several years and has since become the brand name for premium Gigabyte gaming notebooks and PC accessories.  It would seem they have taken the next logical setup and finally included motherboards, the core of any gaming PC, into the Aorus family. 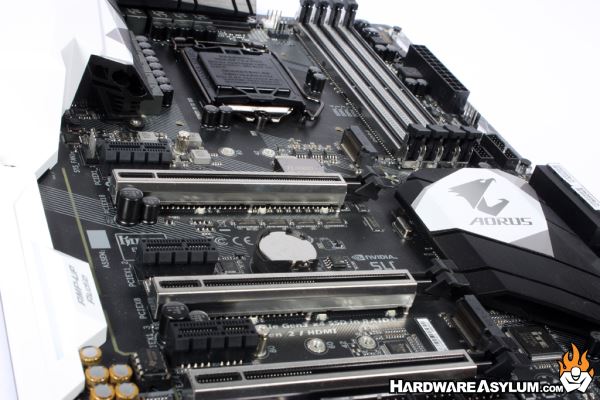 The standards for what makes up a gaming motherboard have changed over the years due mostly to technological advances and consumer trends.  While I often tell people to strike a balance between “what you can afford” and “what you need to have” the fact of the matter is you shouldn’t skimp on a motherboard.  It is the one item that will last between upgrades (to a certain degree) and will determine what expansion cards you’ll ultimately need and/or want to run.

Current trends indicate that high-end onboard audio combined with a customizable network controller is what most gamers have accepted for their gaming rigs.  This is an appealing combo because it frees up expansion slots for more important things like Wi-Fi and video cards.  The Aorus Z270X Gaming 5 is configured like any other 5 series motherboard from Gigabyte with an entire array of Ultra Durable features, a number of cutting edge storage options, some overclocking controls and a dazzling light show.