Motherboard makers will often experiment with different color combinations and try to anticipate what the market demands will be.  For instance, some companies sell a majority of their products in China and may include gold accents whenever they can.  Others market their products to gamers who seem to like Black and Red.  I’m not going to say that motherboard color schemes are what drive sales however “curb appeal” can go a long way.

The Z270X Gaming 5 follows a new color theme made popular by the Gigabyte X99 Designare-EX featuring a Black and White color scheme with polished metal accents scatted about to highlight certain features. 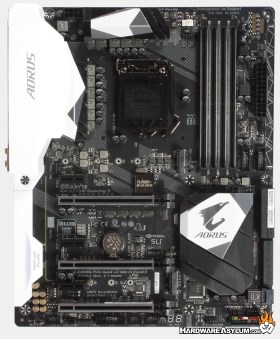 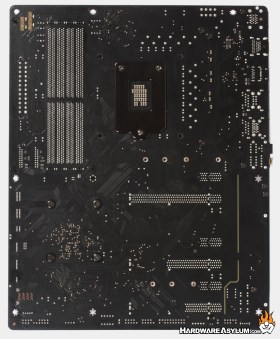 Flipping a motherboard over can tell you a lot about its construction.  Here we can see that the back of the motherboard is virtually devoid of any surface components and features only minimal circuitry including a large patch where the audio controller should be.

Moving to the CPU we can see the dark chrome CPU socket hardware positioned next to the array of PWM components.  One of the first things to be downsized on a mainstream motherboard is the size of the power delivery system and the Z270X Gaming 5 is actually respectable with a total of 11 power phases for the different CPU components and video.  Most Gigabyte motherboards are now using the new PowIRstages and when combined with their 2oz copper PCB can supply more power to the CPU, with less heat and better efficiency. 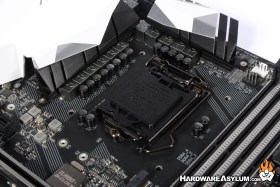 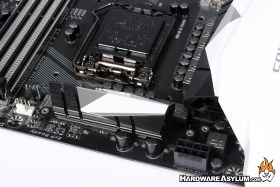 Behind the PWM cooler you'll find the CPU Power connection made up of a single 8-pin connector.  Given the location the power cables should be easy to hide in any modern chassis and easy to remove given the space between the power plug and I/O panel.