One of the unique things in our reviews is the overclocking aspect where we pit the default speed system against the overclocked one in a head-to-head byte match.  The effective overclock for these tests is 5.61Ghz @ 55x multiplier and 102 BLCK and was cooled on my Single Stage Phase Chiller.  The SS Phase brings the CPU temp down to around -30c and allows me to clock the CPU up.  An interesting thing about Kaby Lake is that it responds extremely well to cold and the colder you go the faster the OC will be.  Many of the records that have been posted were done using LN2 which wasn't an option when I did this review and is something I will revisit in the near future.

Besides that, these benchmarks can take hours to run and while running PCMark 8 at 6.5Ghz might be fun it would suck to screw up a pour and have the system crash.  Likewise 5.6Ghz (like in this review) is also a little unrealistic as a 24/7 OC but, real overclocking isn't always about being realistic.

The interesting thing about overclocking Kaby Lake is that two factors play into how successful your overclock will be.  The first and most important is CPU quality and is why you read about overclockers buying several processors and dumping most of them on ebay a week later.  The second is motherboard and how well it can control voltage and handle frequency adjustments.

Out of the box the Apex is very voltage happy meaning it likes to overvolt and, like a bunch.  The ratio between BCLK and voltage is controlled by a factor in the BIOS and can be adjusted or disabled completely.  Personally I prefer to set my voltages manually so I disabled the adjustment and manually set what I needed.  This gives me better temperature control and a sense that I might be making my CPU last longer while I beat the electrical snot out of it. 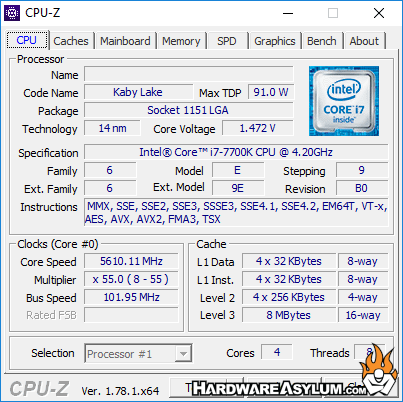 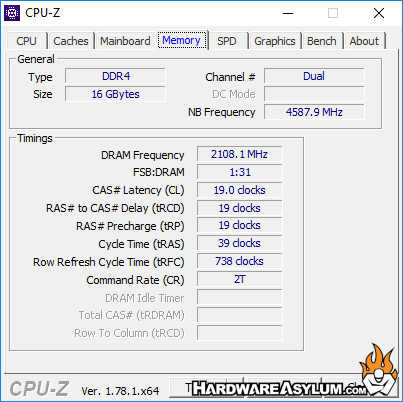 When overclocking it is important to find a "sweet spot" where the performance curve tops out and still remains stable with a reasonable amount of heat production.  For this test I didn’t pay much attention to heat output but rather finding what was stable using the least amount of CPU voltage.  Of course when you get into doing extreme overclocking you’ll find that the Voltage/Frequency curve tends to climb at a logarithmic scale which starts around 5.2Ghz on the Core i7 7700k so "least amount of voltage" is a bit of a misnomer.

Under the phase I kept raising the CPU multiplier and running tests until the system crashed.  As it would turn out 5.6Ghz on the Single Stage Phase Chiller was the best it could do.  CPU voltage was set to 1.46v and it remained there both at idle and under load indicating that load line compensation was working perfectly.

Knowing that my CPU could handle 5.6Ghz I decided to push things a little more so I could reach the magical 4266Mhz memory speed.   To accomplish this the CPU ratio was reduced to 55x and the BCLK was raised to 102.  Two Mhz on BCLK won’t throw things too far out of spec and due to the power of multiplication the system was back at 5.61Ghz.

Overall I was extremely pleased with the overclocking results and they really tell you something about how everything scales at the different speeds.  At 4133Mhz the resulting memory bandwidth is faster than a quad channel Ivy Bridge-E and that is saying something about how well the new processor can scale under the right conditions.