The ASUS Apex is following a black on black color theme with accent grey features on the PCI Express slots, memory slots and PCB graphics.  Both of the heatsinks feature a brushed metal finish and angular style giving this motherboard a very unique style.

One of the most striking features of the ASUS Apex is the shape of the motherboard.  Along the edges you’ll see they are not completely straight and angle inwards giving the motherboard a one of a kind appearance. 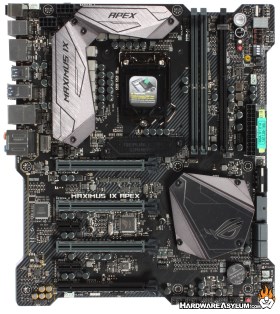 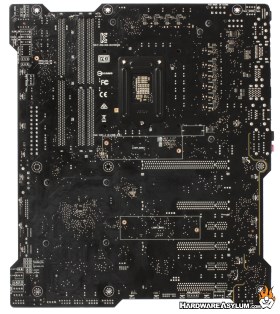 Flipping the motherboard can tell us a lot about how it is constructed including where some of the major chips are located.  Unlike many of the other motherboards I have reviewed there is a good amount of activity on the back of the Apex.  In addition to the multitude of wave solder connections you’ll find graphics and labels for key locations including a call out to fan headers, LED light strips and the large squares in the middle are Light Bars allowing you to personalize your Apex.

Every mfg has a go to power design that works and they tend to stick with it.  The VRM on the Maximus IX Apex is a 10 phase design using large chokes and a double stacked array of capacitors flanking the edges.   I was looking back at the Maximux IV (P67 based) motherboard and noticed quite a few similarities in the design along with some obvious differences. 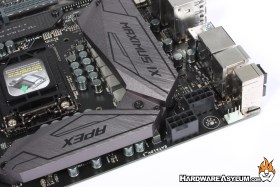 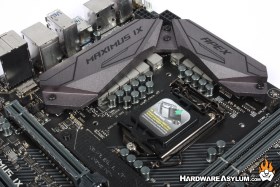 Any proper overclocking motherboard needs ample current to operate effectively under LN2 and the ASUS Apex is rocking a double stack of 8-pin CPU power connectors between the I/O panel and VRM heatsink.  Despite the location and proximity to additional fan headers they are surprisingly easy to access.

Also notice the scattering of capacitors all around the motherboard with some found near the I/O and even under the VRM heatsink.

There is nothing like smooth power to get the “juice(s)” flowing.  No? ok moving on.