The Sapphire Pure Black P67 is a black edition motherboard featuring a black PCB and vibrant blue expansion slots.  As with most board designs, the primary slots are the accent color while the remaining connections are typically black so to blend in after the system has been assembled. The back of the board is devoid of major system components but does have a few surface mount parts visible.  You will find a protector plate covering the PWM circuits, which is a nice feature to help prevent the PWM from shorting out. 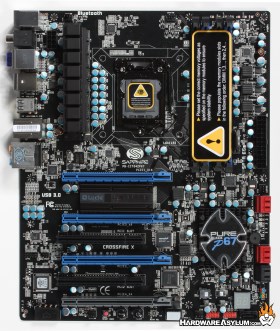 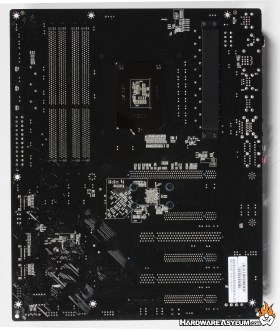 We generally include at least one overall shot of the back of the motherboard since it is one of the best ways to map out the overall design.  For instance note the length of the PCI Express slots.  On the front of the board we find four 16x video card slots while on the back of the board we can clearly see that three of them are electrically wired for 8x operation.  This will make more sense later in the review.

The CPU socket is a LOTES design featuring a black chrome latch and back plate.  While the Foxconn sockets are more popular we have found that many mobo makers have started using LOTES sockets simply for the color.  Feeding the CPU is an eight phase hybrid digital PWM in a compact arraignment next to the CPU. 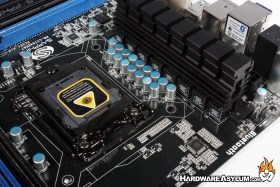 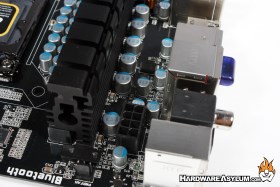 8pin CPU power can be found next to the I/O panel.  This location is ideal for power delivery but doesn't give you much room to remove the plug.  It can be done, you just need small fingers.

Dual channel memory comes standard on the Sandy Bridge and the Pure Black P67 supports DDR3 modules up to 2133Mhz.  There are a total of 4 banks available and a 16GB maximum memory supported.  24pin ATX power is located in the traditional location near the upper edge of the motherboard. 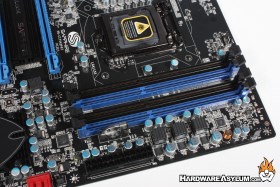 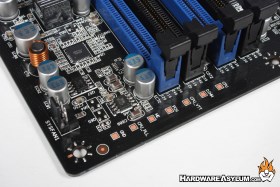 Across the top of the motherboard you'll find several voltage test points.  This makes testing system voltages extremely easy and accurate since BIOS and system displays will often show a variance after they have been converted.
Motherboards