I have been a computer hardware enthusiast for a long time and when the first Mini ITX motherboards were released I found them to have an interesting concept with plenty of potential.  At the time full ATX motherboard were the king as it allowed the most flexibility in system design and gave motherboard makers plenty of room to add their own technologies and gave enthusiasts what we had come to expect.

Fast forward several years to the rise of the MCP.  The Media Communications Processor is a single chip solution for motherboard chipsets that has reduced the design complexity of a common motherboard.  This complexity was one of the things preventing desktop hardware from running on the Mini ITX form factor.  Of course, for many hardware enthusiasts the smaller form factor was not desirable citing the lack of SLI/Crossfire support and limited circuity for overclocking.

Personally, I have always felt that Mini ITX was the future of the DIY and enthusiast markets because, it had everything you need.  For instance, modern processors lack the ability for worthwhile overclocking and with the death of multi-GPU gaming we are back to using a single GPU there is little need for oversized VRMs and you only need a single expansion slot, even on most gaming rigs. 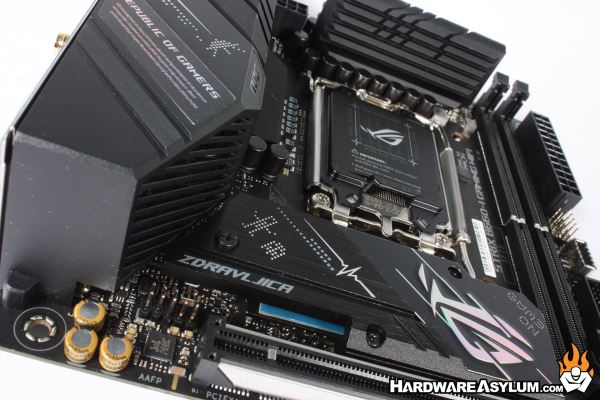 In this review we will be looking at the ROG STRIX B660-I Mini ITX motherboard from ASUS Republic of Gamers.  This is a Mini ITX motherboard supporting the LGA 1700 Alder Lake processor and DDR5 memory.  As the name suggests, the chipset features the Intel B660 chipset which, many people call “The Business” chipset.  Intel claims to support overclocking on the B660 however, given the lower cost, many motherboard makers have reserved it for down market systems and instances where overclocking is not ideal.

Mini ITX motherboards would fall into the “not ideal” situation and has allowed designers to use more economical VRM designs and focus on features and quality over overclocking and performance tuning.  Bottom line, if you want to overclock, grab yourself a K edition LGA 1700 processor and match that with a Z690 enabled motherboard.  These will cost more but, also open up more options.

Now, if you want to experience the power of Alder Lake and DDR5 while keeping a realistic budget for your ultimate gaming rig then the STRIX B660-i might be a perfect choice to consider.

Be sure to check out the Strix B600-I page for a full list of specifications, software support, manuals and upgrades.