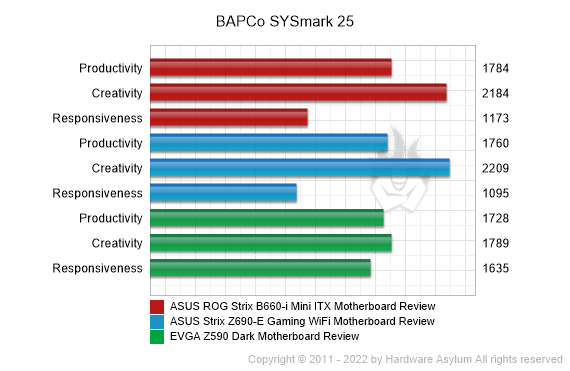 It should be noted that DirectX 11/12+ is not represented in our motherboard reviews because the results are almost purely based on the video card selected and very little to do with motherboard performance.  Likewise the benchmarks we have chosen respond well to minor changes in memory bandwidth and how efficient the system configuration is overall.

I have been refreshing some of the benchmarks (common thread if you have been reading some of my past reviews) and added a few that don't have any historical numbers.  These include BAPCo SYSmark 25, Cinebench R20 and CS:GO.  Of them I am really impressed with the new version of SYSmark as it comes with a few tweaked benchmarks to better represent modern computer workloads.  It is important to note that benchmarks are only as good as their source AND can only be compared when used in context.  So, while I continue to use UT3 in my tests the results are only valid when comparing the current system against others using the same workload.

Finally, we test our systems we do so with the default and auto assigned settings in place so to represent un-turned and out of box performance.  (read: default user setups).  Your performance may vary depending on the time you spent tuning your hardware.