Founders Edition video cards like the GTX 1080 Ti are special cards built and sold by NVIDIA.  These cards are the same ones you can buy from major retailers like Best Buy and can also obtained from board partners like EVGA, Gigabyte, MSI, ASUS, etc..

One of the most distinguishing features of the NVIDIA GTX 1080 Ti Founders Edition is the cooling solution.  This diecast aluminum body is very angular in shape which helps define its unique style.  This is a single fan cooling solution that exhausts outside of the case and is designed to work in a variety cooling configurations from a small form factor build to the largest of enthusiast builds. 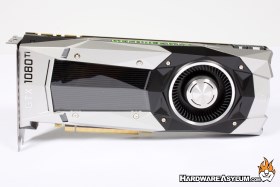 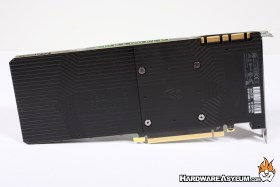 Flipping the card around will show you the unique cast aluminum back plate which is also sectioned into two parts.  The rear section near the power connector can be removed to allow better cooling when cards are located close together in SLI.  Neither backplate offer any direct thermal connection to the PCB but will soak up heat from the video card under normal operation.

To help handle the thermal demands of the GTX 1080 Ti the video connections have been reduced to encompass three Display Port and a single HDMI video connection.  By dropping the larger DVI connection they are given more room for exhaust venting that reduces noise and helps the card cool more efficiently. 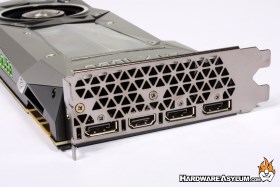 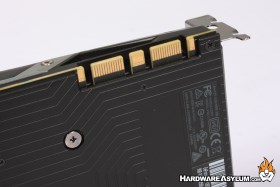 With the launch of the Pascal architecture NVIDIA readdressed how they handle SLI.  Officially NVIDIA will only support 2-way SLI and is done so using high bandwidth SLI bridges that uses both of the SLI fingers.  Enthusiasts can still use 3-way and 4-way SLI however it is up to the application programmers to implement this feature which pretty much excludes any modern game titles.