With this first generation of BlasterX products the engineers at Creative Labs have released a common software suite called Sound Blaster Connect.  It’s a refreshing change from multiple installs and the occasional driver/DLL conflict if you have similar products installed.  The software is icon driven and simple to use with each product appearing across the top. There isn’t much depth here but I found all the things I commonly look for easily. 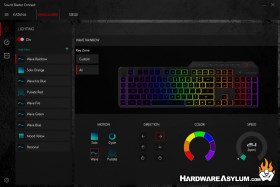 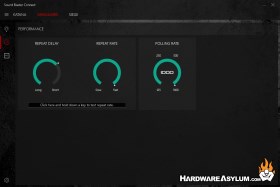 The Vanguard tab provides access to three separate screens of configuration with icons shown on the left side; Lighting, Performance and Macros.  In the Lighting configure you can turn off and on your lighting and set up a custom lighting profile that allows you to set effects by zone.  Most will probably find plenty to like in the 8 preset themes.  Each can be individually tweaked to match your imagination. Customization options include speed and direction of lights motion style and of course 16.8 million colors to keep you busy.

The Performance configuration section gives you control over the repeat delay, repeat rate and polling rate.  I should probably point out the Vanguard K08 also has some built in performance features.  Not only do we have the OMRON switches with PRES but we also have an incredible 26-key rollover with anti-ghosting technology.  No more lagging or ghosting even at peak gaming. 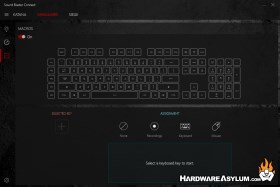 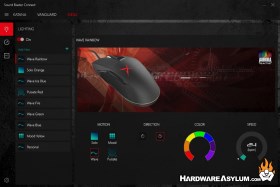 Macros provide the opportunity to program at the key level.  Pairing this with custom colors really makes the M keys fun to play with.  There are shortcuts to remap keys and even mouse functions to the keyboard.

The Siege tab provides access to the Siege M04’s functionality of course.  Again the Lighting section follows the same functionality as with the Vanguard allowing both devices (and the Katana) to use the same settings in sync. 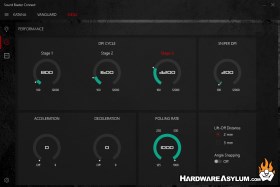 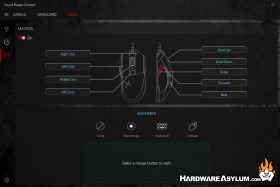 A lot more performance options are offered for the M04.  The quick settings for the DPI button are here and default to 800, 1600 and 3200.  A special Sniper DPI can be set and defaults to 200 DPI on the front thumb button.  I know it goes up to 12000 DPI but most gamers will be much closer to these settings with the right mouse pad, like the AlphaPad!  Acceleration, Deceleration Polling rates, lift off distance and Angle Snapping.  It’s all here for the mousing perfectionists.

Macros give access to remapping the M04’s seven programmable buttons.  Creative has been listening as the settings are pretty solid right out of the box.