Some of the most popular EVGA motherboards followed a classic color scheme featuring a jet black PCB and black expansion slots and even black heatsinks.  Well, the X299 Micro has been completely blacked except for a unique treatment on the motherboard heatsinks.  The VRM cooler is more than a block of metal and shares a design with the I/O cover that you’ll see later in this review. 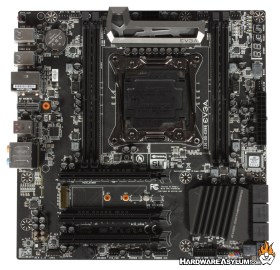 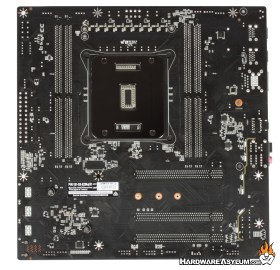 Of course flipping the motherboard over can tell you a lot about how it is constructed including where some of the major chips are located and slot layout.  Every PCI Express slot is fully wired meaning that the full slot width is soldered to the PCB.  That doesn't always mean each slot comes with full set of PCI Express lanes but does simplify the board design a little.  One thing to keep in mind with X-Series CPUs is that every different SKU comes with a unique set of PCI Express lanes and can impact how many lanes go to each slot on the motherboard.

EVGA has chosen a traditional VRM design that places all of the power phases above the processor socket between the memory banks.  Keeping the VRM cool is an important aspect of overclocking and EVGA has included a large ornate heatsink that covers, what appears to be, a 9-phase VRM. 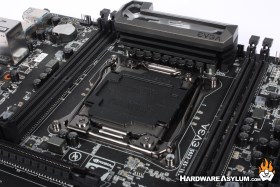 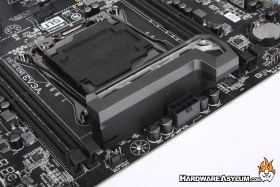 Moving towards the CPU socket we can see that EVGA went with a typical heatsink retention system with the threaded holes on top of the PCB and attached to the CPU socket.  These CPU sockets are quite strong so there is very little chance you’ll bend one using a standard heatsink.

CPU Power is provided by a single 8-pin power connector located behind the VRM cooler.

Quad channel memory is a preferred option on the LGA 2066 however some of the processors in the X-Series line support quad channel while others only support dual channel.  The X99 FTW K supports DDR4 modules at speeds up to 3600Mhz with a maximum of 64GB is addressable.  24pin ATX power is located in the traditional location near the upper edge of the motherboard.