Some say that overclocking is a niche market dominated by hardware enthusiasts and gamers who finally moved out of their parent's basement.  Truth is overclocking is a rather large market perpetuated by mainstream hardware sales.  A good example of this is any gaming centric graphics card that has been factory overclocked.  It may seem outlandish but, to get more performance the manufacturer will adjust the clock speed and sell it at a price premium.  Despite the higher cost these cards sell quite well and yet the same consumers cannot grasp the concept of overclocking or why having an overclocking motherboard is beneficial.

In this review we will be looking at a new motherboard from Gigabyte called the X99 SOC Force.  The SOC stands for Super OverClock and is designed for hardware enthusiasts who like to tweak and tune their systems for the best performance.  At Computex this year we were introduced to the new OC and Gaming motherboards and were told that many of the products shifted such that the OC boards gained some luxury features while the G1 Gaming products gained options to make them friendlier to gamers and system builders.

This may seem a little counterproductive until you realize that most extreme overclockers have started moving away from raw CPU overclocks and focused more on memory overclocking and rarely use more than two video cards.  Knowing this empowered Gigabyte to streamline the OC series and focus more on delivering CPU and Memory overclocking performance while leaving the GPU power for gamers. 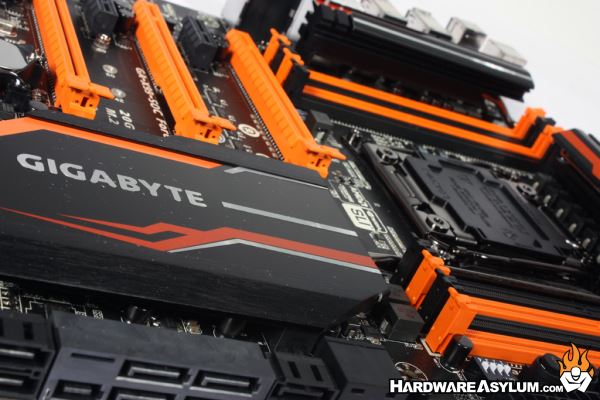 The X99-SOC Force is a very unique motherboard and breaks the traditional mold of "more is better" when it comes to enthusiast hardware.  This is somewhat of a misnomer since the real value is the little things that you may not always notice.  In terms of overall features, construction and design of the SOC Force it is considerably simpler than other X99 options which typically lowers build cost and usually enhances performance.  So far public reaction to this approach has been extremely good with the previous Gigabyte OC motherboards so let’s hope it stays that way.