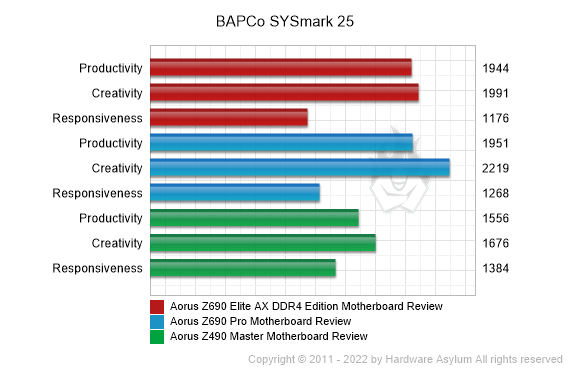 It should be noted that DirectX 11/12+ is not represented in our motherboard reviews because the results are almost purely based on the video card selected and very little to do with motherboard performance.  Likewise the benchmarks we have chosen respond well to minor changes in memory bandwidth and how efficient the system configuration is overall.

The results here are very interesting and we can clearly see the performance advantage you get from a much more powerful processor.  The Z690 running DDR5 is clearly the performance winner here with the DDR4 version at a very close second.  In gaming benchmarks there is virtually no change showing that gaming benchmarks have yet to take advantage of the extra memory speed.  Cinebench posted the same score, and I would be concerned if it didn’t considering this is a CPU benchmark.

Both SYSMark and PCMark provide an accurate reflection when it comes to the advantages of DDR5 while also reflecting what we saw in our synthetic tests.

Finally, we test our systems we do so with the default and auto assigned settings in place so to represent un-turned and out of box performance.  (read: default user setups).  Your performance may vary depending on the time you spent tuning your hardware.