Benchtop buttons are something many companies have experimented with and can range from simple power and reset buttons to more advanced options that will control BCLK and provide voltage readings.  Very few companies have been successful putting these controls onboard and will often resort to using complex software based solutions over USB or using external control boards.  There is no right or wrong way to provide advanced overclocking features however, if a company does choose to implement the feature it is important that they provide everything in one location and do so with and intuitive interface. 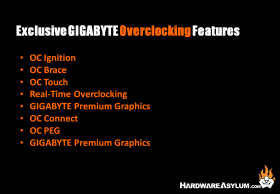 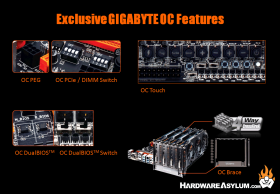 Gigabyte has provided an extremely robust advanced overclocking solution that is almost too complex to explain but comes with a very simple name, OC Touch.  OC Touch features a familiar power button followed by plus and minus buttons for multiplier and BCLK.  The Gear button changes the stepping of the BCLK from 1 to .1.  Turbo brings back memories of single button overclocking on the original IBM PC Clones and works in much the same way.  Finally the Tag button is a new feature that will load custom BIOS settings after a CMOS reset.

Along with OC Touch you'll find specialized buttons for boot to BIOS, reset, memory safe, settings lock and clear CMOS.  A new feature on the Z97X SOC is a double gang of dip switches to disable PCI Express slots and disable individual memory slots.  This can be helpful when running multi card benchmarks or when your memory modules are chilling under a memory container at -140c.

An often overlooked feature are the voltage read points, most of the time the value you set in the BIOS is carried thru and remains stable while the system is running but every once in awhile you may encounter a voltage drop and need to know how much to compensate for.  The voltage read point will give you that information and reacts in real time.  You have two testing methods either using the included VOM probes or surface pads.

On previous OC motherboards the ever important DEBUG LED was located behind the 24pin power connector and was pretty much obscured from view.  On the Z97X SOC edition the DEBUG has been moved to the top of the motherboard and easily viewable from any direction.

While onboard overclocking controls are a nice visual feature there is at least one hidden upgrade that is often overlooked on the new Z97X-SOC and SOC Force motherboard, solid power pins.

That's right, if you look in each of the power sockets you will see solid pins instead of the expanded metal versions common since the beginning of time.  Solid pins may help with power delivery or could just be a passing fad.  The jury is still out on that one.