ASUS ROG motherboards follow a black on black color scheme.  In a way the color is pretty boring but goes with anything making builds relatively straight forward, at least from a color standpoint.   You will find several brushed metal details on the VRM heatsink and chipset that really accent the motherboard nicely.  One of the biggest features of the Maximus X Formula is the full coverage shroud to hide the “ugly” electrical components underneath.

I never quite understood why these covers were a thing back in the day but they have become quite popular in recent years. 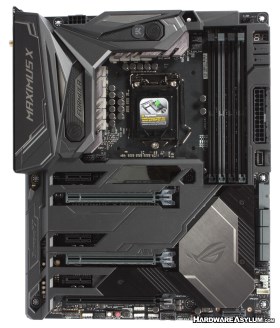 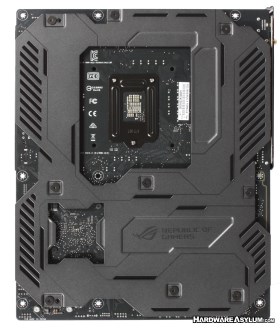 Flipping the motherboard can tell us a lot about how it is constructed including where some of the major chips are located, assuming you can see the actual PCB.  The back of the Maxmius X Formula is covered by a decorative backplate similar to what you would find on a modern graphics card.  Normally these plates help to reinforce the PCB and dissipate heat however I feel that this one is purely decorative and was a “why not” decision to compliment the shroud covering the front of the board. 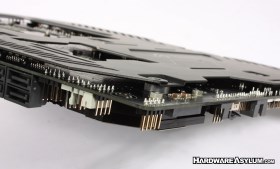 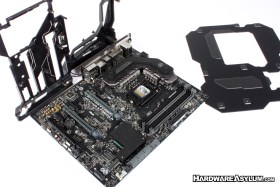 Of course with the plate removed the shroud will come away revealing the raw PCB we have all grown to love.

Every mfg has a go to power design that works and they tend to stick with it.  The VRM on the Maximus X Formula is a 10 phase design using large chokes and a double stacked array of capacitors flanking the edges.  Ironically enough this is the same power design used on the Maximus IX Apex which was designed for extreme LN2 overclocking. 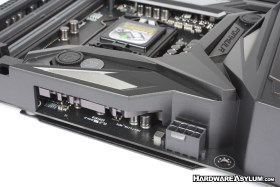 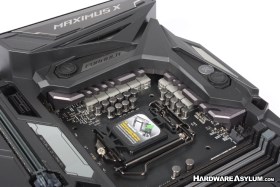 Unlike on the Apex you will only get a single 8-pin CPU power connection which is located at the top of the board and free from any shroud interference.