I was one of the lucky ones.  When the first Threadripper hit the market I was impressed with the X399 motherboard options but decided to sit the generation out.  Sure that might have hurt my HEDT ego but, I saved me some money and headache.  Fast forward to Computex 2019 and the announcement that a new Threadripper was on its way and would be sporting a new memory controller, faster cores and PCI Express 4.0.

Needless to say I got excited to tryi it out.

Lucky for me the new Threadripper 3 required a new socket and old motherboards were not reverse compatible so buying a new processor wasn’t a big deal.  Newegg had them in stock on launch day AND sold out in about 5 minutes.  A week later they were back in stock and I was lucky enough to buy a 3960X before they went out of stock once again.

I was also lucky to get in three new motherboards including the MSI TRX40 Creator featured in this review along with a Heatkiller Waterblock and some shiny new 4000Mhz Ballistix Elite memory.

It is difficult to summarize this motherboard and suffice to say I am conflicted.  The motherboard is a very solid design, support up to seven M.2 NVMe SSDs, 256GB of DDR4 memory and three-way SLI and Crossfire.  It has attained one of the highest Multi GPU Index scores and supports Threadripper which is one of the highest core count processors on the market. 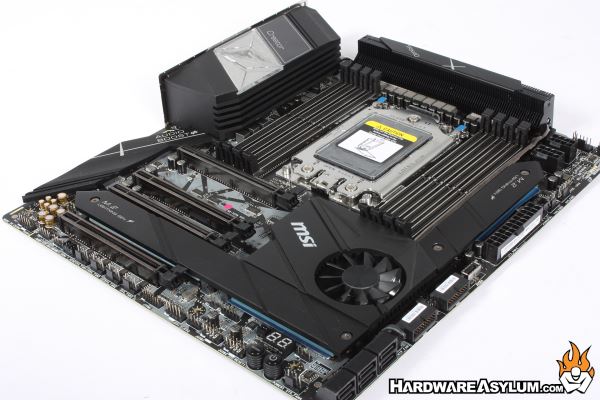 On paper and in person the motherboard is an engineering marvel, that just needs a little more time in the oven.  Not only did I have trouble with memory compatibility but testing the PCI Express slot distribution ran into issues with lane allocation.  I suspect that my processor might be bad which would explain the weak memory controller and broken PCI Express lanes.  It wouldn't be the first time and likely won't be the last.

In terms of performance the TRX40 Creator delivered some interesting scores.  Of course synthetic performance was off the charts due to the 48 threads of the 3960X but, when it came down to real world performance the gains were a little less dynamic.  In fact our COD4 benchmark actually was slower while UT3 was faster.  (I’m not sure how that happened).  Sysmark 2018 and PCMark 10 offered the best look at total performance showing off the power of the Threadripper while illustrating that while it might be a monster CPU we are still limited by the subsystem.

Overall this motherboard is a 50/50 for me.  I like the overall design, the board features MSI Mystic Light, had metal reinforcement on the expansion slots, plenty of options for storage and an extremely good motherboard cooling system.  The UEFI has also been proven on many of the other motherboards I have tested making it a familiar experience and out of the box it gave me no problems.

Sadly I would have loved to have a physical user manual.  Granted they are only used a handful of time but, having the book there is just convenient especially when you run into issues.  I also had issues with my Ballistix Elite memory and while the issue might be my processor it isn't the first time these sticks gave me issues.  There were controls for Game Boost in the BIOS that really just bumped the BCLK up a half a MHz, plenty of LN2 controls in the UEFI and yet no way to monitor voltages and the DEBUG LED doesn’t show the CPU temp.  Collectively it makes you wonder why any of that was included.