The I/O panel is always an interesting part of the motherboard as it dictates what connectivity options will be available.  Starting at the left we have two CMOS related buttons.  The top button is for clearing the CMOS, a common then when overclocking while the other allows for an automatic BIOS flash for when the system is no longer operational.  Several enthusiasts have complained about the lack of a secondary BIOS on the TRX40 Creator motherboard and I suspect this button is the main reason for it. 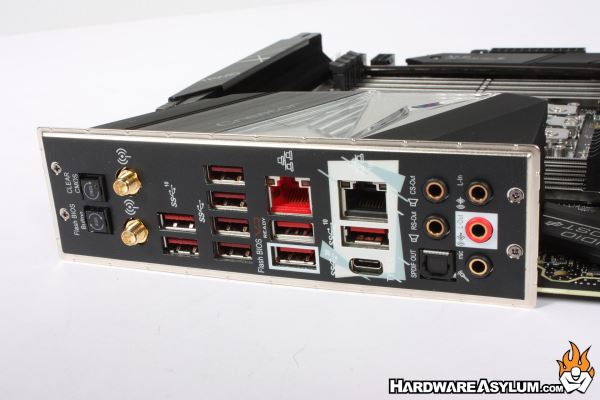 Everything else is pretty much USB.  USB 3.2 occupies the entire I/O.  Gen2 are double stacked near the WiFi antenna connectors.  Gen1 is the quad stack in the middle.  Under the First Gigabit LAN jack are two VR Ready USB 3.2 Gen 2 connectors with the bottom port being used for the BIOS Flashback.

The Ethernet jack with the white background is the special 10G Gigabit for super speed networking.  Finally we have onboard Intel AC Wireless and 8-channel audio with a digital connection over optical.  Audio connections are also gold plated for the extra bling.

Onboard audio is based on the Realtek ALC 1220 7.1 controller and built to support the MSI Audio Boost HD technology with an ESS DAC and Nahimic sound processing.  The audio occupies a separated section of the motherboard that is electrically separated from the rest of the main PCB.  You can see this separation in the PCB layers where the board is devoid of color. 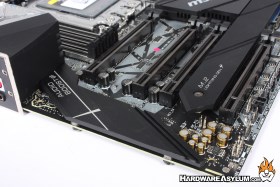 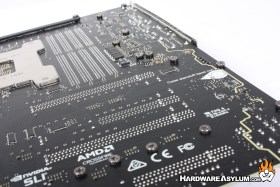 To further illustrate that the layers are completely separate on the reverse side of the motherboard you'll find a series of white LEDs that light up and shine thru the PCB layers when the system is powered on.

These lights are also covered when the EMI (decorative plastic) cover is in place.

One of the benefits to upgrading to a specialized motherboard is that not only do you get more features onboard but also in-box.  The MSI TRX40 Creator comes with a number of nice accessories including what you see below.  (and some not pictured like the performance qualification) 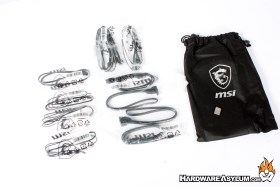 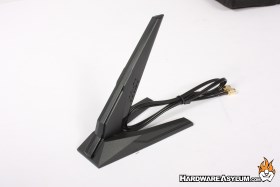 You also get some RGB LED accessory cables, SATA cables and wifi antenna

Of course what you are not seeing is a user manual which you can download as a PDF from the MSI website and the driver disk.  The drivers are now on a super small, I’m going to lose this, USB drive.  Personally I’m all for putting drivers on USB however what I take issue with is when that driver disk is small and easily lost which makes no sense considering that it is a perfect marketing opportunity lost for being too small.

Now, the lack of a physical manual in the box is inexcusable.