The MSI X299 Gaming Pro Carbon is a full ATX motherboard featuring a matte black PCB accented with grey and black heatsinks.  Each of these heatsinks features a carbon fiber decoration and a silver accent "which really ties everything together".   The motherboard also features an EMI shield to protect the onboard audio and cover the I/O connections.  Covers like this have become very common across a number of different motherboards and while they are often obscured by expansion cards and cooling solutions it visually helps the motherboard stand out in custom builds. 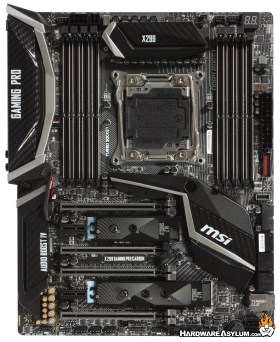 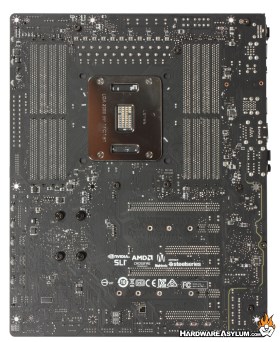 Looking at the back of the motherboard we can get an indication as to how the motherboard is constructed, most notability, how the PCI Express slots are wired.  From this we can determine which slots are primary and secondary in terms of bandwidth and better understand optimal performance.  There are a few surface mounted components near the VRM and chipset.  I am actually surprised there are no heatspreaders which may speak to how efficient the power delivery is.

On the X299 Gaming Pro Carbon you will find a twelve phase power supply complete with OC Tuning options and load line calibration.  This is one of the larger VRMs I have found on X299 and should go a long way at leveling out the power draw and heat production under normal use while still giving you the power delivery needed to run 5Ghz+, with proper cooling. 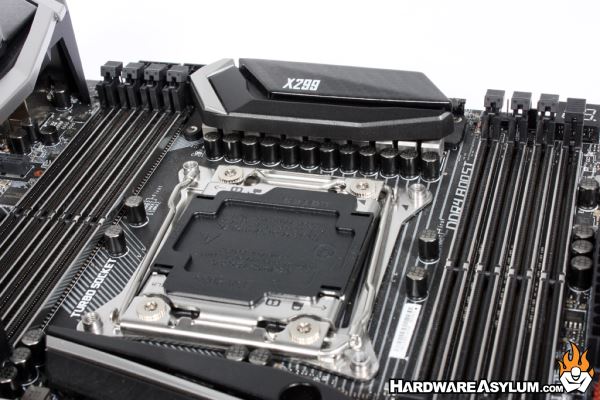 Quad channel memory is a preferred option on the LGA 2066 however some of the processors in the X-Series line support quad channel while others only support dual channel.  The X299 Gaming Pro Carbon supports DDR4 modules at speeds up to 4266Mhz with a maximum of 128GB is addressable.  This is highly dependent on your processor as some respond better to high frequency memory than others. 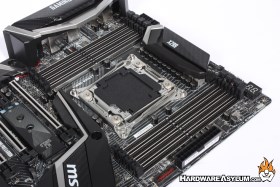 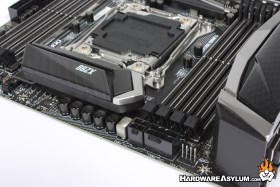 24pin ATX power is located in the traditional location near the upper edge of the motherboard along with a debug LED and optional temperature readout.