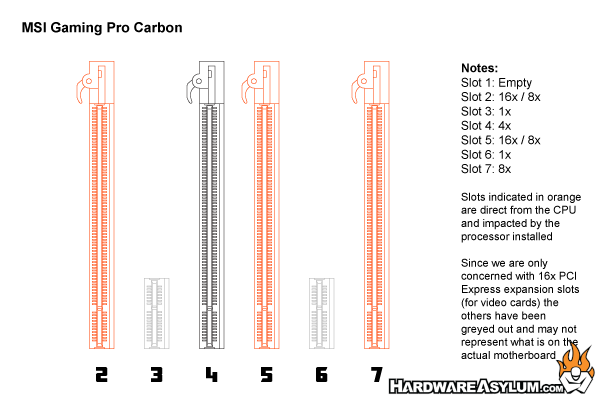 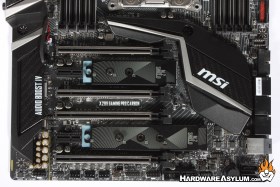 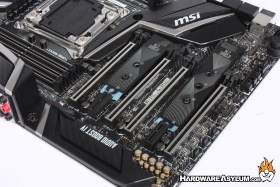 As indicated by the PCI Express layout chart there are a total of four 16x PCI Express slots on this motherboard with three of them using bandwidth earmarked for video cards.  Slot two will be the primary video card slot and will run at a full 16x when only a single card is installed.   With 44-Lane CPUs slot five will also run at a full 16x making it a second primary slot.

For 3-way configurations slot eight will be used and is hardwired to 8x while slot four is locked in at 4x and appears to use bandwidth from the chipset.

Things get a little interesting with 28-Lane and 16-Lane CPUs where you lose available PCI Express lanes from the CPU.  Much to my surprise you can still run 3-way configurations with a 28-lane CPU and with a 16-Lane CPU only 2-way is possible given that slot eight is disabled completely.

For best video performance you will want to populate slots two and five with video cards and unlike with other X299 motherboards the Gaming Pro Carbon doesn’t punish you for buying the cost effective 28-Lane CPU over the expensive 44-Lane version.