The I/O panel is a little unique and features many of the standard things we have come to expect.  You'll find a combined PS/2 keyboard and mouse port over two USB 2.0 ports, next to that you'll find the CMOS reset and ROG Connect buttons followed by four USB 2.0 ports with the white one being dedicated to ROG Connect.  The board also includes Optical audio and the normal analog audio connections, a single Intel LAN port, eSATA and four USB 3.0 ports shown in blue. 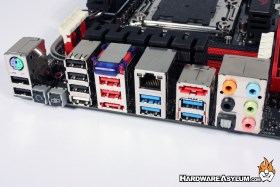 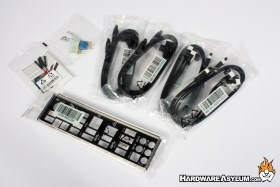 The Goodie Package
We have come to expect more from our high-end motherboards to help justify the additional cost and fir the first time ever we are almost to the point of having too much stuff.  ASUS tend to push the envelope when it comes to the accessory package which includes everything you'll need to get up and running and then some.

In terms of documentation you will get an extremely detailed User Guide that talks about every feature found on this motherboard, a driver disk complete with system and overclocking utilities and cable identification stickers. 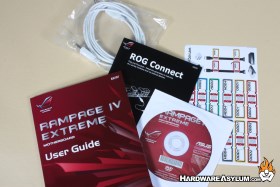 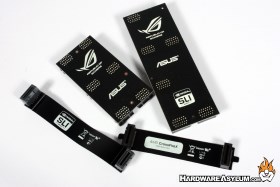 A variety of multi GPU configurations are supported on the Rampage IV Extreme including the coveted 4-way SLI and they've got a bridge for that.

LGA 2011 introduced a new and larger socket design that continued to use the familiar LGA 1366 heatsink mounting pattern.  While the new LGA 2011 mounting method makes installing aircoolers a snap it doesn't help the overclocker when it comes to attaching a Single Stage Phase or LN2 Container. 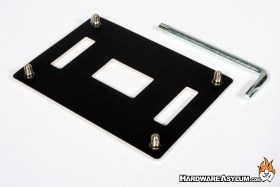 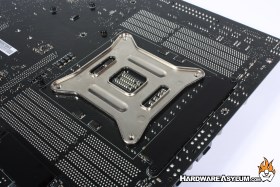 To bypass this Asus has included a standard LGA 2011 backplate and torx key so you can remove the custom base and replace it with the stock one.  This remoes the threaded mounting holes leaving room to install the custom cooling gear.

Sadly this awesome feature isn't a standard offering on any motherboard aside from the Rampage IV Extreme and the only way to replicate it would be with a Dremel tool and cut-off wheel. (not recommended btw)
Motherboards